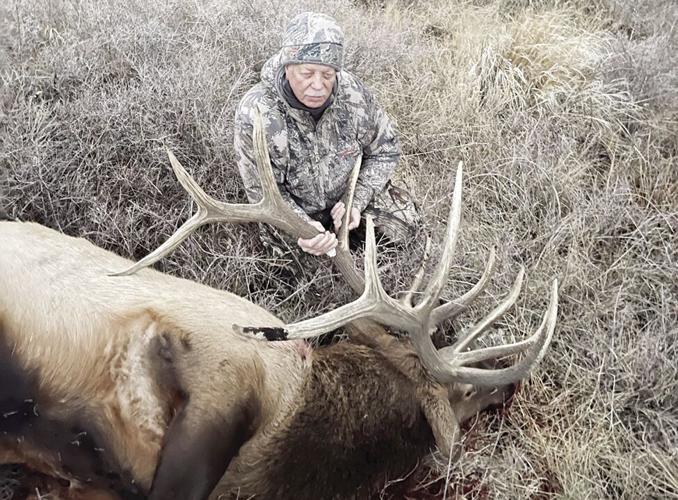 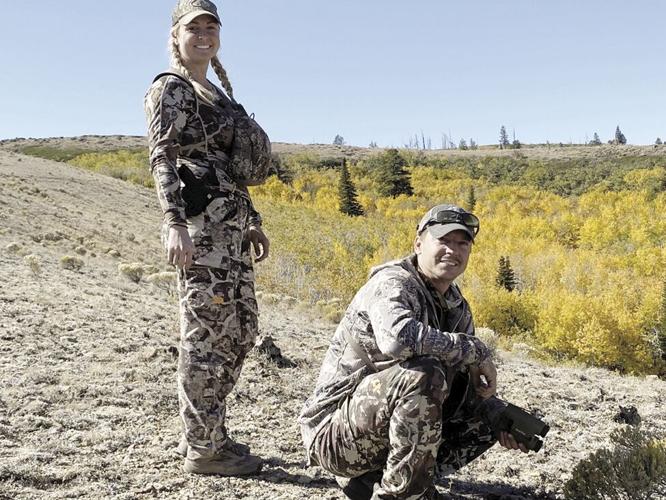 If you can see the photo of Tom Miles and his Super Hunt bull, you know how it ends, but there is much more to this story than a life-long elk hunter who killed a trophy bull. Miles, a 70-year-old native Idahoan from Meridian, drew the ultra-coveted Super Hunt tag in 2021, and what followed lived up to the name.

“It was quite the adventure,” Miles said. “We saw lots of elk, lots of bulls and lots of nice bulls, but it wasn’t easy. It was the hardest hunt I’ve ever done.”

And Miles is quick to point out it wasn’t just his hunt. His whole family participated, including his sons and their families. They knew the significance of what could be a once-in-a-lifetime tag, and were more than happy to share this experience with their father.

Miles said he puts in for a Super Hunt tag every year, but only spends modest amounts.

“I know guys who put in thousands of dollars-worth, and I’m not one of those guys,” he said.

He said he received a phone call last summer and thought it might be spam, but it wasn’t. It was Idaho Fish and Game staff informing him that he drew one of 10 Super Hunt elk tags, which would allow him to hunt elk in any open season in the entire state.

Coincidentally, it was the second Super Hunt elk tag drawn by a family member in recent years. From the moment he received the news, preparation began. From research to boots-on-the-ground scouting, he wanted to make the most of this rare opportunity.

The bugles of September

September is a magical time for elk hunters. The fall colors start to appear, the weather cools down, and bull elk begin bugling and challenging each other during the rut. It’s a time when normally secretive, solitary bulls become the neighborhood bullies who want to announce their dominance to the world.

Miles was familiar with an area that holds a healthy elk population in which tags are extremely hard to draw, so he headed into southern Idaho to catch the peak of the rut during a muzzleloader hunt.

With his family as his team, they found the conditions to be hot and dusty. As expected, there was no shortage of bugling bulls, but there was a problem. The season hadn’t started yet, and as if playing a mean prank, the bulls stopped bugling the morning the season opened.

But that didn’t slow Miles and his family from taking full advantage of the opportunity that lay before them. Like an old saying goes, hunting is all luck, and the harder you work, the luckier you get.

They stuck with it, combing the high-elevation ridges, canyons and draws in less-than-ideal conditions. They hiked the lonely country and sat for hours peering through binoculars and spotting scopes to locate herds. Miles said they saw plenty of elk, but not a bull worthy of the tag.

That changed one evening when they spotted a herd of elk bedded in a brush patch. Upon further investigation, they noticed long, sweeping antlers that were sticking out above the brush. The bull then stood up. It was at that very moment Miles realized he had found “the one.” They set out to get Miles within muzzleloader range, which is typically about 100 yards, preferably closer.

They tried for an entire week to the close the gap on this prized bull, making several attempts that were thwarted by poor stalking conditions, a savvy bull and a herd of sharp-eyed cows.

Although Miles never raised his muzzleloader, his sights were set.

“I had my heart set on that bull” he said.

They nicknamed the bull “Mr. Big,” and as the muzzleloader season was winding down, it was as if he vanished into the mountains. They were not able to locate him again. But luckily, there was a rifle season approaching, which would allow Miles to keep hunting for him.

Miles has decades of elk hunting experience in his home state of Idaho. He knows that during some years finding any bull can be a challenge, especially in a general season hunt.

“When you draw a good controlled hunt, your standards come up a bit, and you want to get a mature bull,” he explained. “But with a Super Hunt tag, it goes up to another level.”

The blessing and possible curse of a Super Hunt tag is you have so much opportunity in prime game country that it can be difficult to determine whether the animal in front of you is “the one.”

Will you later wish you had held out for something larger? Or do you let a bull, or several bulls, walk away and later regret it because “the one” was standing in front of you, and you didn’t realize it until it was too late?

It’s a good problem to have, but a challenge none-the-less, and Miles said that despite the long odds of ever drawing the tag again, he was willing to go home empty handed rather than settle for a bull that didn’t meet his high standard.

Miles’ muzzleloader season was coming to a close, and the family had a chance to rest and continue scouting before a rifle season opened. They hoped the weather would be more favorable, and it was, to a point. Temperatures dropped and snow arrived, along with howling winds that made it a challenge to get to Mr. Big’s backyard high in the mountains.

They hunted extremely hard, spending day after day in bone-chilling wind. They spotted bulls by the dozens, including some bulls that Miles said he wouldn’t have hesitated to shoot with any other tag.

After enduring the hours, days and miles of freezing, pre-dawn hikes into elk country and returning after dark having sat and glassed distant canyons and slopes for elk, he started to have his doubts.

“I started to question whether I should keep passing them up,” he said.

The eyes have it

But part of a family hunt is the support he got from the team, which included six family members and two extended family, who were with him every step of the way. That kept his morale high and gave him the motivation to grind out each day, even when it felt more like work than fun.

The days started blending into a series of dark, cold mornings and windy days that lead to the same results: lots of elk, but not one he wanted to take and end his hunt.

When one of Miles’ sons spotted a distant herd through his spotting scope that had a big bull, their interest was piqued. Miles estimated the herd was about two miles away in rugged country, but the herd bull looked promising so they started toward it.

But midway there, they spotted a separate herd in a different direction, and it also had a very large bull.

The herd was a mile away, and the bull was roughly 10 miles from the area where they first spotted Mr. Big, which is an afternoon stroll for an elk herd, so it was well within the realm of possibility. They decided to get a closer look.

But like desert puddles after a summer thundershower, elk herds have a tendency of evaporating into thin air, which is exactly what this one seemed to do.

Miles said over the weeks in the field, they had learned, or relearned, valuable lessons about elk behavior, and found it more productive to let their eyes do the work instead of their legs. They posted up, cranked up the magnification and started picking apart the landscape for any sign of elk.

Finally, they spotted an elk in a large patch of aspens, but didn’t know if this was Mr. Big’s herd, or a different one. An elk moved into a clearing, and they saw it was a spike bull.

They suspected they had a herd pinned down, but couldn’t see them all. Daylight was fading, which forced a decision whether to sit and wait for the elk to move into the open, or make something happen.

“It exploded with elk, and they were all bulls,” Miles said.

As they had hoped, one of them was in fact Mr. Big. He was trailing the herd and running full speed directly away from Miles and across the canyon. It was a difficult, if not impossible, shot to make.

“I was bummed out,” Miles said. “He was a good one and looked like the one we’d been chasing since Day 1.”

A breath of still air

But it wouldn’t be days or weeks, or even next year, until Miles had another chance at this bull because it made a fatal mistake. It stopped, turned broadside and looked back.

Miles son called the range at 638 yards, which is beyond the range of many hunters and their rifles. But Miles was shooting his .300 PRC, and he is fully aware of its capabilities because he spends countless hours at the range practicing before each season and shooting at various distances. While the situation was less-than-ideal, he didn’t second guess himself.

“Trust me, I was well prepared for that shot,” he said.

The bull stopping coincided with the weather finally cooperating. The wind died before the shot rang out, and Miles dropped the bull with a single shot.

The hunt was over, but not the adventure. The bull tumbled down a steep hillside on the opposite side of the canyon as the evening light faded. As if on cue, a snowstorm started that quickly turned into a blizzard. They had to navigate across the canyon and up a steep, slick slope to get to the bull.

When they got there, Miles said he was sure it was Mr. Big because of the long third tines on the antlers, the shape of the main beams, and that the bull had a distinct face.

They also had a photo of the first time they spotted him, and the bull matched it.

A hunt to remember

For Miles, Mr. Big may be the highlight of his long career of elk hunting in Idaho. But there might also be another Mr. Big in his future, because he’s not ready to close the book on elk hunting just yet. He said there are more chapters to be written, maybe even another Super Hunt tag.

“I’ve already got my money in on this year’s drawing,” he said.