You have permission to edit this article.
Edit
Home
News
Sports
Obituaries
Announcements
Classifieds
Things To Do
Business Directory
Special Sections
Find Us Online
1 of 6 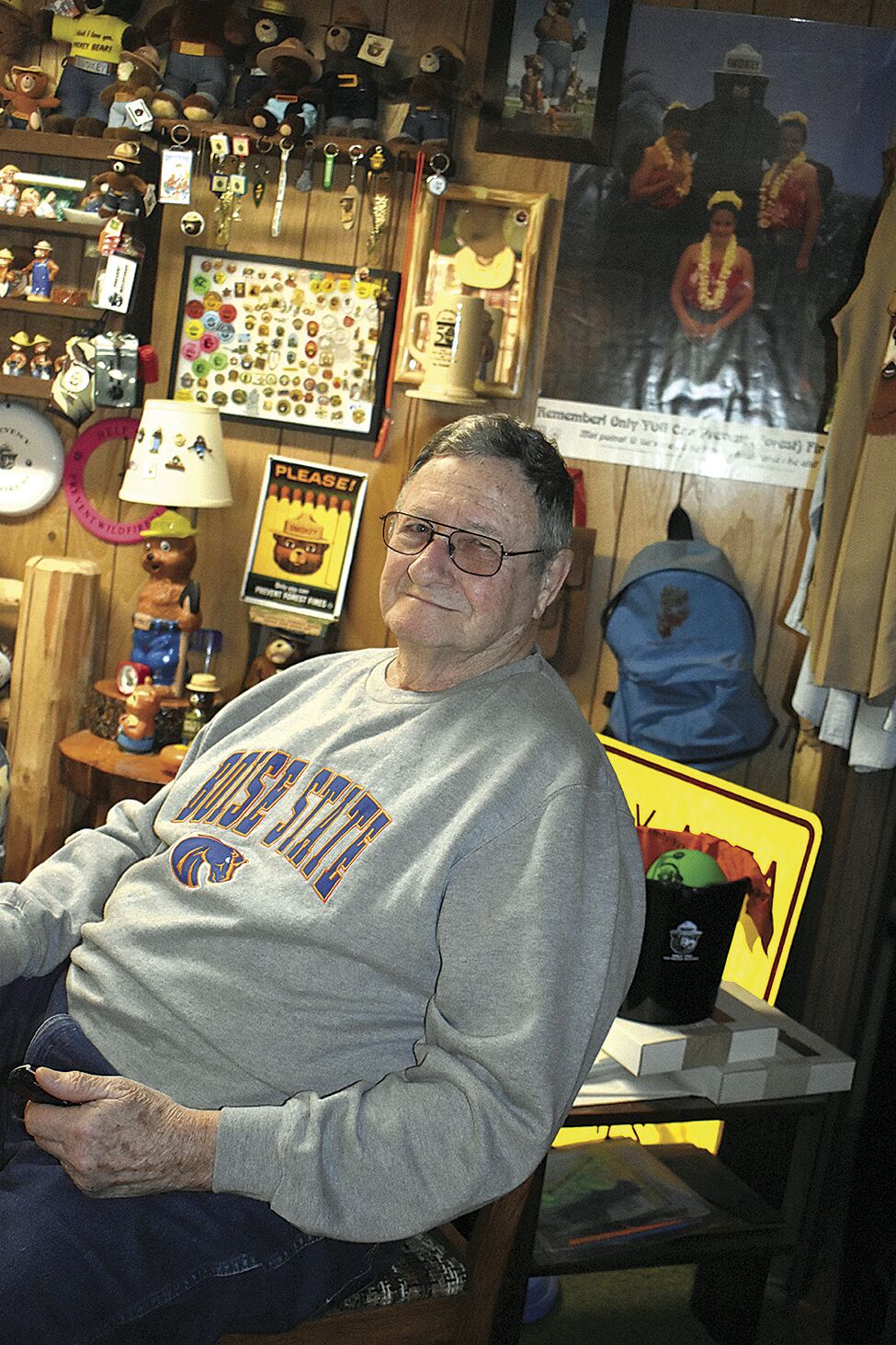 Ray Kresek at his home/museum in Northern Spokane Washington in the “Smokey Bear” room. 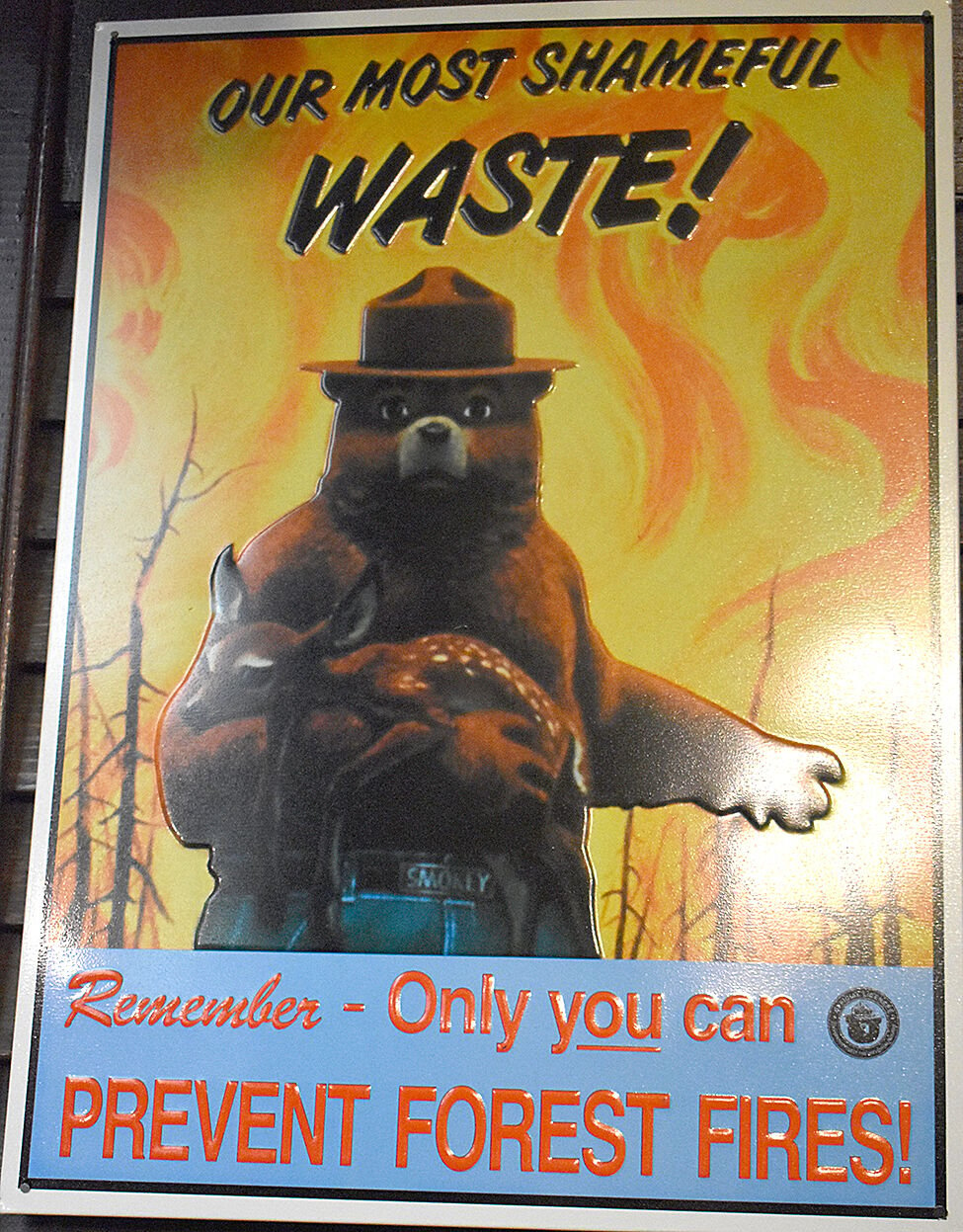 The original “Smokey Bear” sign (1950) was metal created for the first promotion of Smokey. 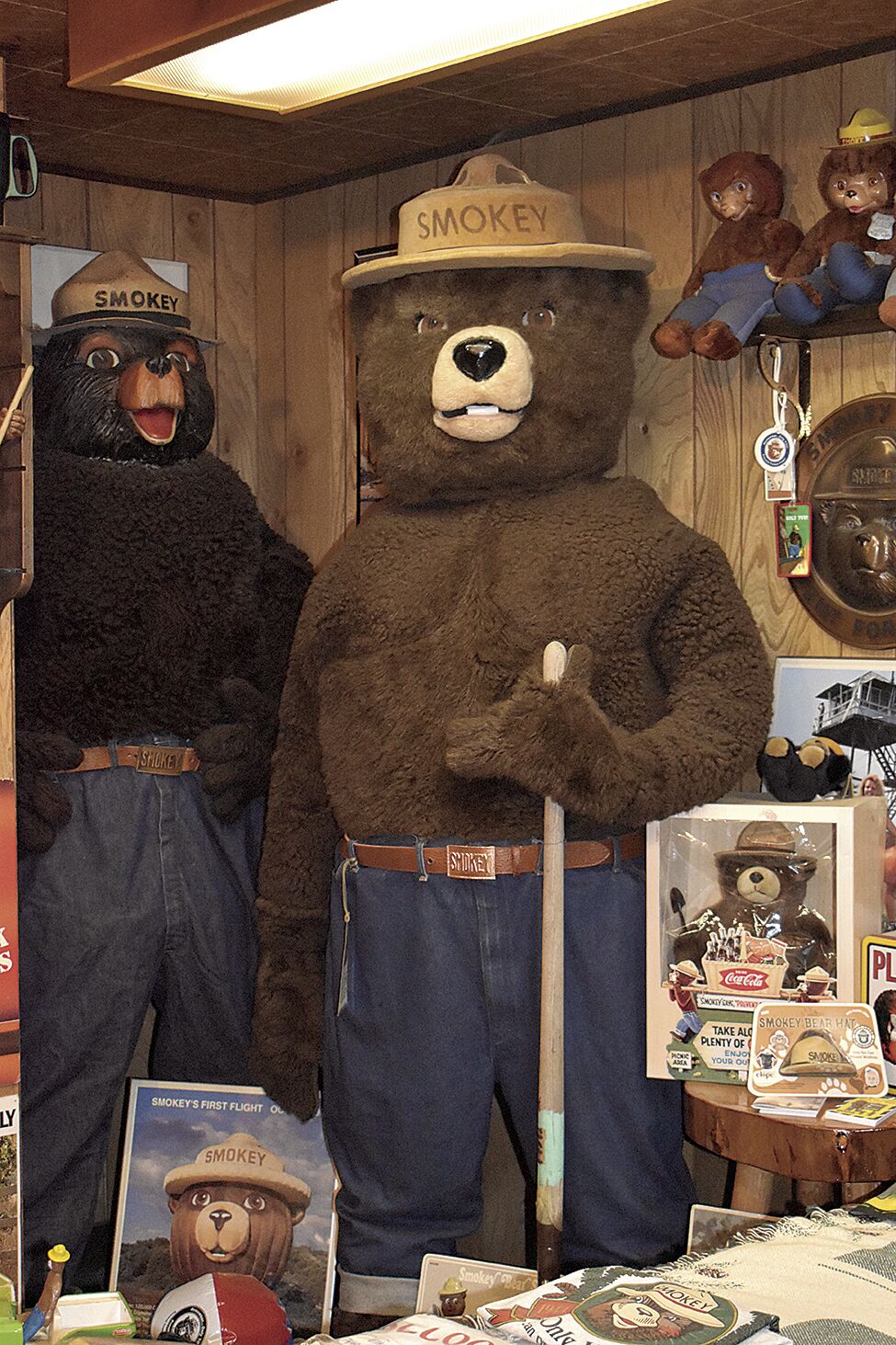 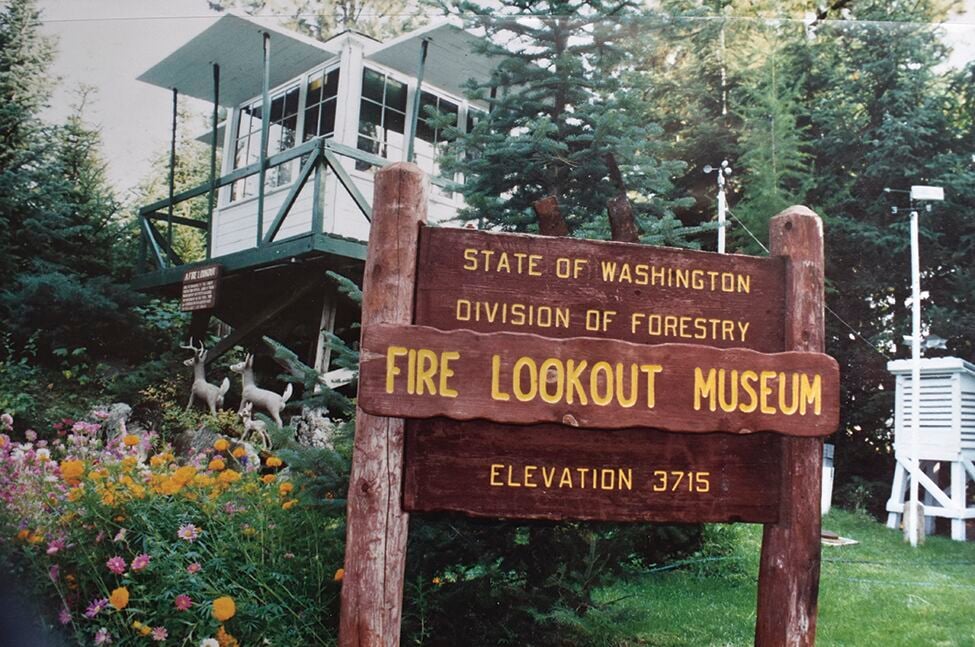 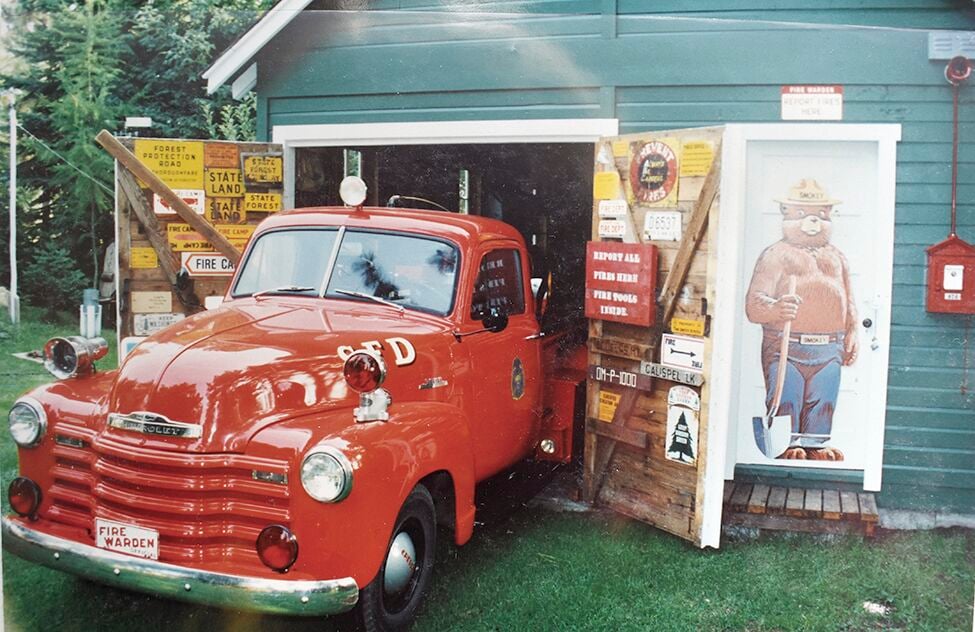 A 1953 Chevrolet 3/4 ton fire truck, fully restored in front of a real fire station of the time. 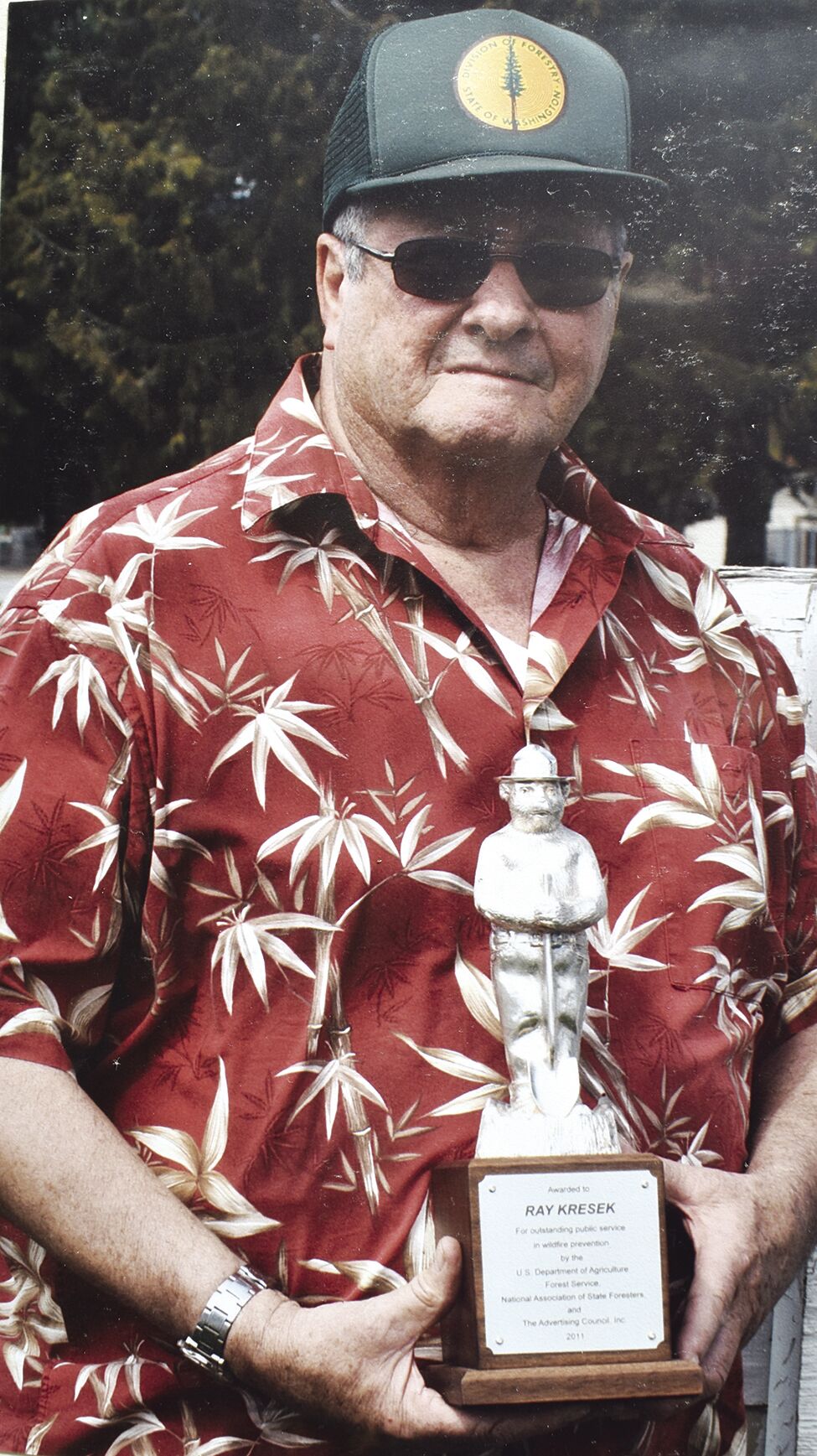 Ray Kresek with his “Smokey Bear” trophy for outstanding service in fire prevention from the Forest Service. Photo from “Firetowers of the Northwest” by Ray Kresek.

Ray Kresek at his home/museum in Northern Spokane Washington in the “Smokey Bear” room.

The original “Smokey Bear” sign (1950) was metal created for the first promotion of Smokey.

A 1953 Chevrolet 3/4 ton fire truck, fully restored in front of a real fire station of the time.

Ray Kresek with his “Smokey Bear” trophy for outstanding service in fire prevention from the Forest Service. Photo from “Firetowers of the Northwest” by Ray Kresek.

(Editor’s Note: The Clearwater Tribune’s 2021 Vacation Guide is enclosed in this week’s issue. There are articles and photos featuring lookout towers around the area, along with other features, photos, and advertisements. We hope our readers enjoy this year’s Guide as much as we did publishing the special edition. This article is a continuation of the lookout towers information included in the Guide. Our thanks to the advertisers that make publishing this publication possible.)

By family tradition and love of the work, Ray Kresek has been in the fire control business almost all of his life. It seems to run in the Kresek family from his father, down to him, and with his son following as well.

Ray started in 1954 when both telephones and radios were in use, but his Dad started in 1941, before those conveniences existed, at the beginning of WWII. (If you had a family, or you had a job that related to the war effort, you were ineligible. Because his dad had two boys, he wasn’t draftable.)

Ray says, “There was a thing called the Aircraft Warning Service which was a branch of the army, the navy, and the coast guard. Dad fell under all three of them. Whichever tail wagged was the one he answered to because he provided the radios all up and down the coast, in the state of Washington, at least. But, his Air Force Warning System went all up and down the Washington, Oregon, California coast, into Idaho and into Montana where they manned the lookouts all year long, 24 hours per day watching for enemy aircraft. That was their mission, because they had no radar system. The only thing they had were the eyes and ears from the lookout, watching for anything incoming. They relied on that for the whole of 1942, first year of WWII. It wasn’t until the end of that year that radar network came into being, eliminating the old way. Up until then the radio sufficed.

Ray’s Dad was the radio technician for the Washington State Division of Forestry, which was the precursor for the State Department of Natural Resources during the war, WWII. He invented the first portable radio that was used in forestry in this state.”

Ray continued, “So, Dad maintained all those radios, he and two other servicemen. There were enemy attacks in Washington by balloon, and by submarine launched sea-planes and little bombers into Oregon, Washington and California, that were little known to the public. They didn’t do a lot of damage. They did start one fire.

“What the enemy didn’t know was that our weather dictated when fires would burn. Fires don’t burn well in the winter!

“The Aircraft Warning Service was the civilian network in the beginning of the war. So that’s what Dad did during the war.

“I didn’t come into the fire service until 13 years later when I manned a lookout for the state, said Ray, “And now my son is the radio technician for the northeast quarter of the Department of Natural Resources (DNR) in Washington. He’s got 500 radios and two mountaintop repeaters to make sure they run all during fire season.

“So we’re a three generation family of Washington State DNR. My father invented the radio and now my kid’s fixing them.”

Ray comments on his retirement, “Before I retired, I wanted to go back on a lookout because I started there and I wanted to finish with fire.”

At 35 years (on expanded time) he got to choose his own tower to retire from, after writing his book. He wanted to choose one that represented the whole deal of the forest service towers.

He says, “There was a radio in three corners, so there had to be a fourth corner, so that was my ham radio!

“I was there only one week when lightning blew out all my radios! My refrigerator went up in smoke. My dog got bit on her nose. She bailed over the railing, which is a