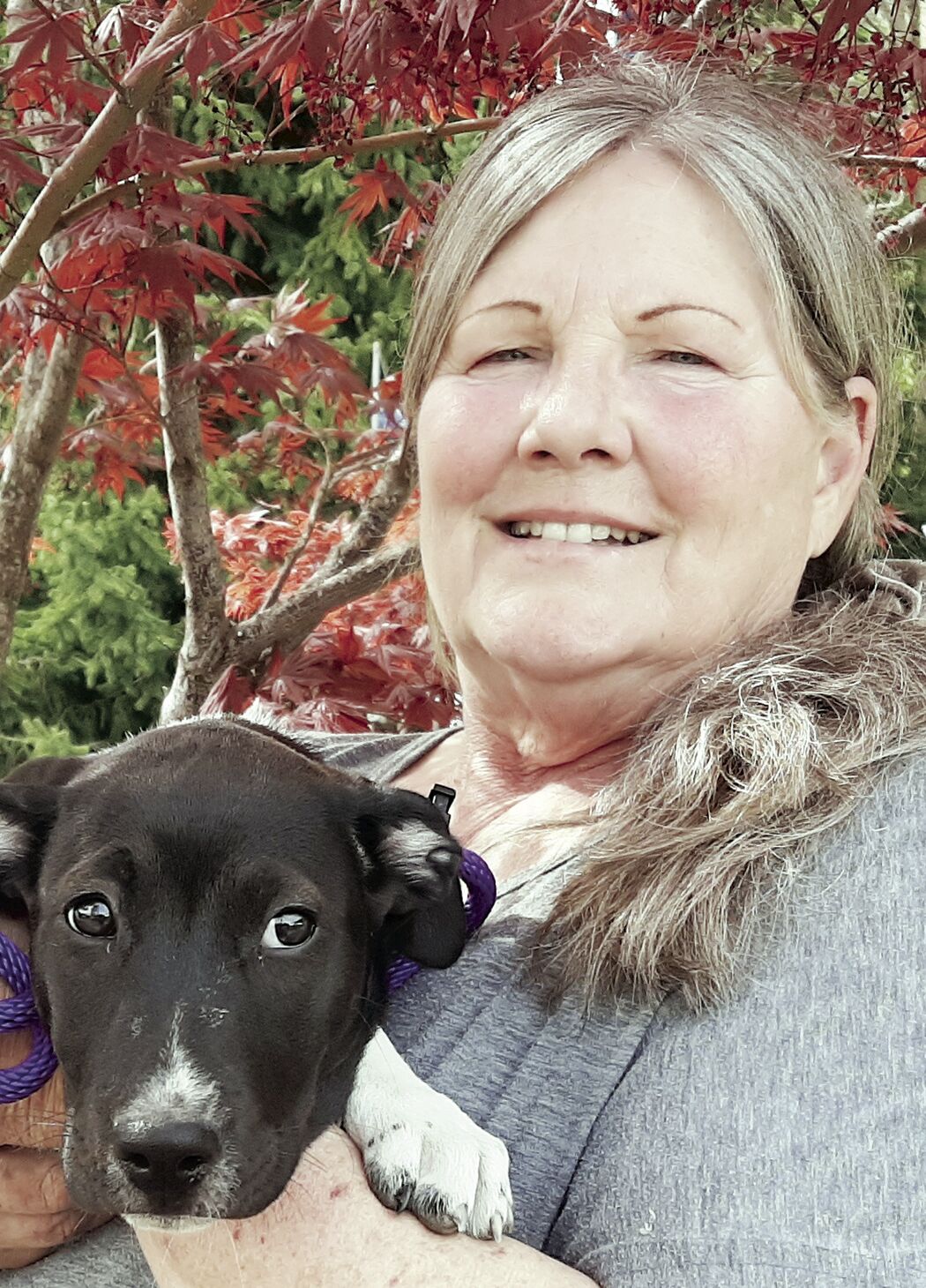 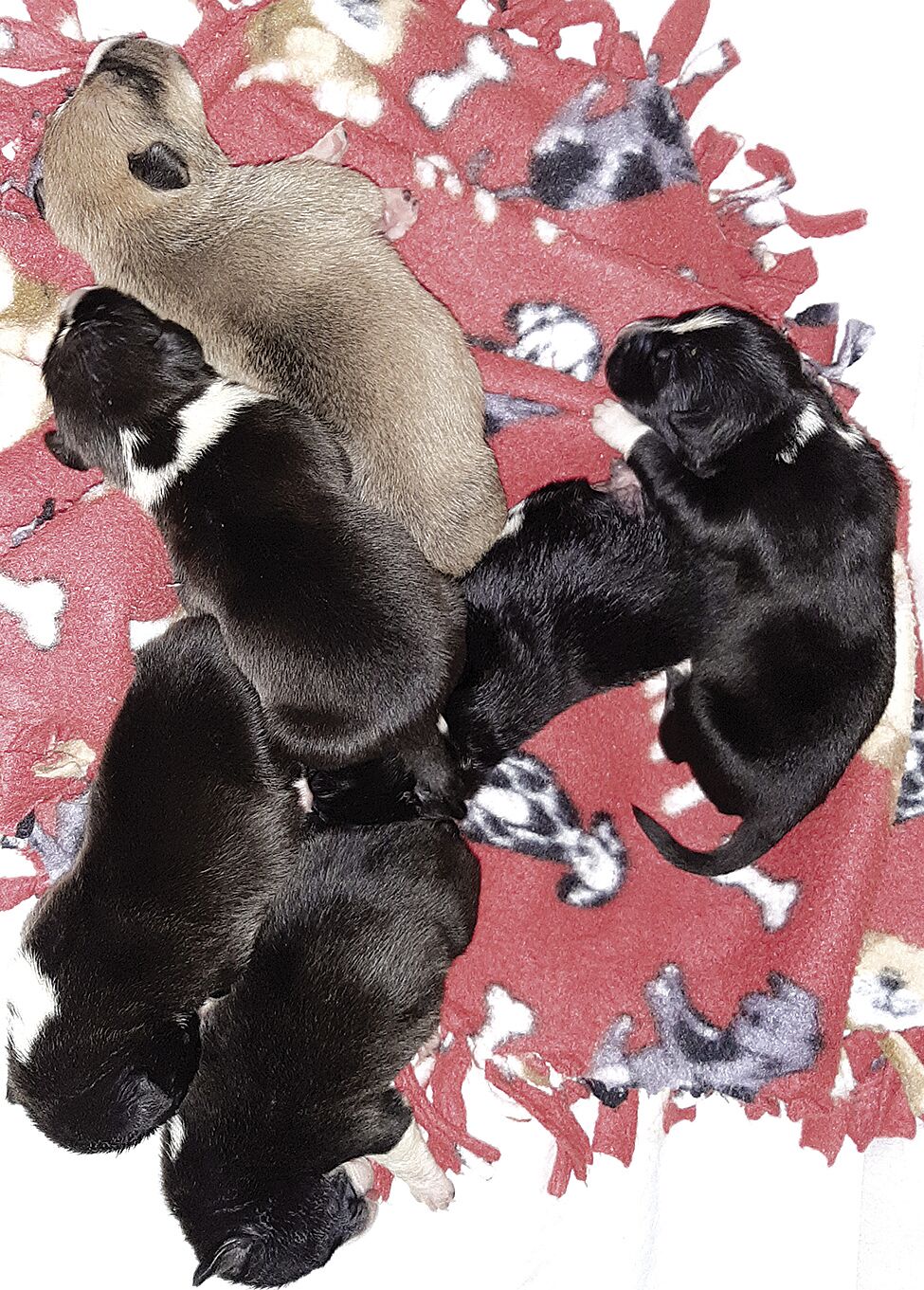 The abandoned puppies, who were nursed to health by Cynthia and JW, and through the Clearwater Humane Society, found good homes.

The abandoned puppies, who were nursed to health by Cynthia and JW, and through the Clearwater Humane Society, found good homes.

When Cynthia Hedden is not volunteering on our Fair Board or working in her garden, she’s volunteering as Sherrie Chamber’s right-hand gal at the Clearwater Humane Society.

Cynthia grew up in northern California where her dad worked for the California Fish and Game Department. Her parents, Alden and Nancy Cleveland, regularly hunted in Idaho for years and retired to Orofino in 1987.

Meanwhile, after high school, Cynthia moved to the Los Angles area where she got a job with the California Department of Transportation. That is where she met her future husband, JW (Jerry Wayne) Hedden in 1989. JW was a mechanic and Cynthia managed parts. In fact, Cynthia was one of the first woman parts department managers in the state.

As their relationship got more serious, Cynthia began to encourage JW to come with her to visit Idaho. Despite all his bad jokes about Idaho, JW wanted to meet Cynthia’s parents. It was love at first sight, both with Cynthia’s family and Orofino. They soon bought property just a mile from Cynthia’s parents and moved here in 1996.

Cynthia first got involved with the Clearwater Humane Society when she volunteered to make calls for people to bake cookies for their booth at the Clearwater County Fair. The next year, she agreed to help sell Lumberjack Days t-shirts at the Fair and Lumberjack Days. Cynthia wore a t-shirt featuring an earring-wearing Chihuahua, reminiscent of her own dog, Pogo. Sherrie Chambers fell in love with Cynthia’s shirt. Cynthia promptly bought a Lumberjack Days t-shirt, changed and gifted Sherrie her Chihuahua shirt. While that first meeting made a lasting impression on both women, they did not meet again for some time.

When Cynthia’s beloved Pogo passed, she called Sherrie about a dog, Miles, that she had read was up for adoption. Sherrie remembers that call, “Her heart was really broken. Pogo had been a big part of her life.” Cynthia remembers how kind and caring Sherrie was and how she had said, “You can never replace a dog, but you always have room in your heart for another.” Cynthia went on to adopt her “little bitty” baby Miles and told Sherrie, “If you ever need help, let me know.”

Three weeks later Sherrie called. The Clearwater Humane Society had two full pens of rescued puppies and were getting the pups ready for adoption. Sherrie needed help keeping the kennels clean and the pups socialized to people. “That’s how it started,” Cynthia said, “Me cleaning up pee and poo and playing with puppies. That was 11 or 12 years ago and JW and I have been fostering and adopting out animals with Sherrie ever since”.

What Cynthia loves most about volunteering with the Humane Society is “that I get to help both the animals and the people who adopt them. I just love seeing the look on a person’s face when they are holding their new puppy or cat and just snuggling them on their chest,” she said. “That’s when I know we’ve really made a difference.”

“This winter is a good case in point,” she said. “February 2, a woman found a box of seven newborn border collie/lab cross puppies freezing to death in a dumpster. They still had their umbilical cords attached and one had succumbed to the cold” Cynthia said, shaking her head. “Sherrie called to ask if JW and I would foster them.” “I have to give credit to my husband, he’s my other half. He’s so involved in what I do,” she added.

“It had been a while since we’d bottle fed a litter of puppies. First, we had to warm them up and then get them fed. They usually don’t take to the bottle, so you really have to work to get them to eat. It took about an hour to feed all six and we had to feed them every three hours so JW and I just fed and slept in shifts. It’s so worth it though,” she said, “to see these tiny living beings that someone threw away, grow and thrive.” Cynthia sat up a little straighter when she added, “While it really isn’t about me, I do feel an enriched sense of purpose in my life. You know, those six puppies would not be alive today if we had not been there. We have found great homes for five of those puppies and 12-week-old Amy, will find a great home, too.”

“I know we make a difference in the lives of people who adopt, too,” she continued. “Usually, people looking to adopt have experienced a loss. They have all this love to give and a big hole in their lives. We are sort of like matchmakers. We bring people with a lot of life to give together with an animal who will thrive on all that love.

“What really matters to me is the impact we have on the lives of the animals and the people who adopt them. I remember one family that had a five year old daughter at the time they adopted their dog. A few years later she set up a lemonade stand and worked all day to earn $42 which she proudly sent to the Humane Society to help other animals and people connect.

“Our reward is being remembered by them and seeing how happy they are. That makes it all worthwhile. We love it when people send us pictures or stop us on the street to show us their dog. Lots of folks also stop by PetCo to give us the latest on their pets. Its great!” she said enthusiastically.

“Seeing the look of love between the animals and their owners - It just doesn’t get any better than that,” Cynthia concluded with a twinkle in her eye.

Spotlight on Service is inspired by Rotary’s Motto: Service Above Self.

Volunteers spotlighted in this column are suggested by the community.  Call or text your suggested volunteer’s contact information to: Lynn MacEachern, at 208 827-1412.