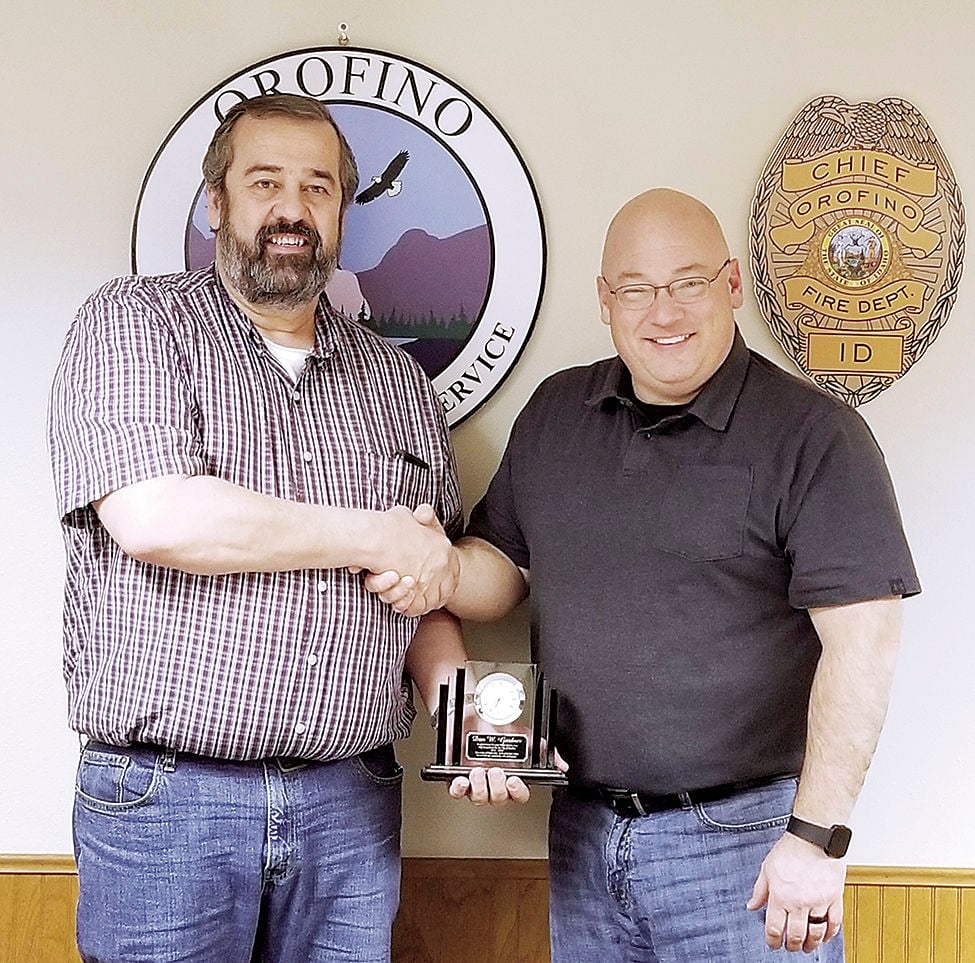 On behalf of Orofino City Council, Mayor Smathers (right) noted their appreciation for outgoing Councilmember Don Gardner who has served on the council since 2012. 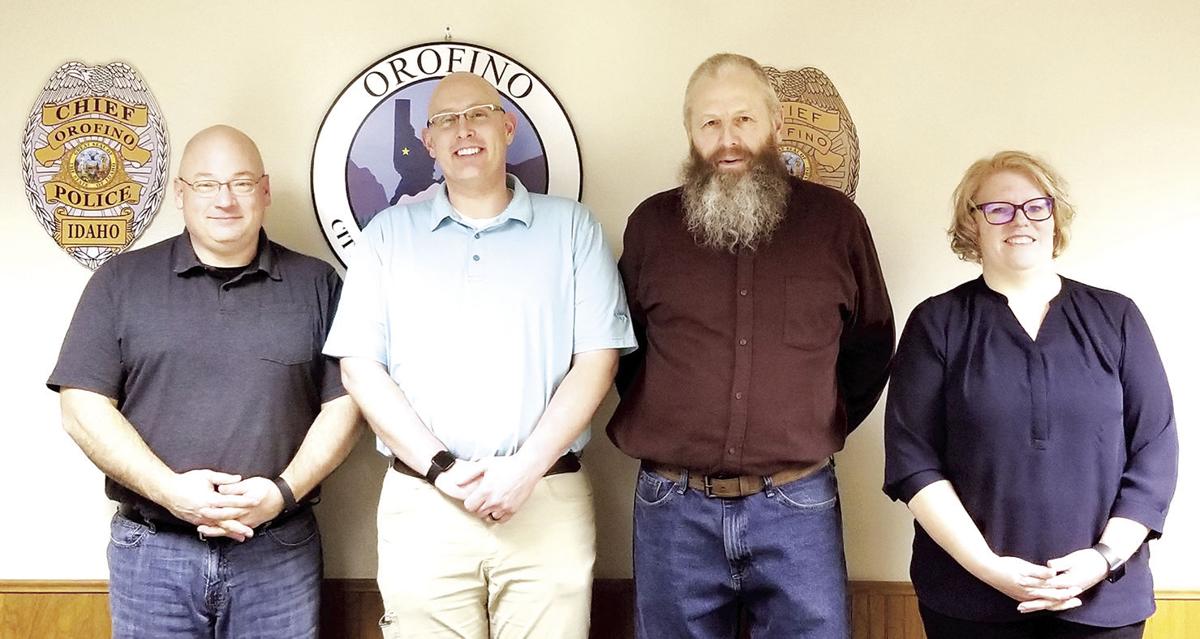 Mayor Ryan Smathers was sworn in by City Clerk Janet Montambo, followed by re-elected city council members Jennifer Dunaway and Josh Tilley, as well as Doug Donner, who returns to serve on City Council after an eight year absence. From left: Smathers, Tilley, Donner and Dunaway.

On behalf of Orofino City Council, Mayor Smathers (right) noted their appreciation for outgoing Councilmember Don Gardner who has served on the council since 2012.

Mayor Ryan Smathers was sworn in by City Clerk Janet Montambo, followed by re-elected city council members Jennifer Dunaway and Josh Tilley, as well as Doug Donner, who returns to serve on City Council after an eight year absence. From left: Smathers, Tilley, Donner and Dunaway.

The council noted their appreciation for outgoing Council member Don Gardner who has served on the council since 2012.

Mayor Ryan Smathers was sworn in, followed by re-elected members Jennifer Dunaway and Josh Tilley, as well as Doug Donner who returns to serve on City Council after an eight year absence.

Ironically, it was a moment later, that Smathers informed Simmons the time to stand in as mayor had already arrived, and the Mayor recused himself for the following item of business.

Todd Perry led the discussion on the Planning and Zoning Commission’s findings and recommendations for the Special Use request to have a four-plex multi-family dwelling unit in a single-family dwelling district, filed by Wendi Richardson. A public hearing was held Dec. 17, 2019.

There was no supporting testimony, no written or verbal correspondence and no opposing testimony submitted. Emmett Bonner offered uncommitted testimony, expressing his concern over the number of vehicles which would be permitted at the four-plex, as he accesses the back of his property from Jaeger Lane.

Once closed for further public comment, the Commission agreed to the application, but requested that the condition of one and a half parking spaces be allowed for each unit, and that no recreational trailers or boats could be parked on the premises.

The council, upon reviewing the information and additional site maps indicating parking, unanimously approved the request.

Not our creek, not their creek, but everyone’s problem…

The county and the city have agreed to share the costs for River Design Group Inc. (RDG) of Whitefish, MT, to create a Scope of Work to evaluate and develop conceptual design alternatives for the Orofino Creek confluence area. The project goal is to design a solution that can improve sediment routing through the crossing given existing constraints.

River Design Group is the same company who worked with the problem following the floods of 1996 and 1997. Past efforts to reduce deposition through channel reshaping were temporarily effective, but unable to overcome natural constraints related to backwater and incoming bedload supply that occur periodically.

Gardner stressed that by having a plan in place, it opens more doors for a funding source for 2021. Both the county and the city agree that something needs to be done.

The council agreed to participate with the county in proceeding with the services of RDG.

Lease to be renewed

The city has drafted a new lease agreement with Lamar Advertising Co. for the two billboards along Hwy. 12. The term of the lease will be for a 10 year period versus a 20 year period. The city will increase the rent for both signs and the cost will increase by 10% after the first five years of the new agreement.

In turn, the city has agreed to remove the eight ash trees which are partially obstructing the visibility of the signs, and will replace the trees with a shorter species of vegetation, which will not interfere with the signs.

Council woman Jennifer Dunaway asked to add the Free Pantry Project to the evening’s agenda. She had seen the idea in another community and asked for council members input on trying the idea locally.

The Free Pantry Project begins with an ordinary cupboard, filled with items to be offered to those folks on limited incomes, who are struggling to make ends meet. The Free Pantry is available to anyone who is in need.

It would be stocked with non-perishable food items and paper goods. People could take what they need or restock the pantry. “I’m not sure if the project will be used or abused. But I thought it was kind of a neat idea and I would be willing to take the project on, if we think it might be possible. I feel that by having a location in town, that those without transportation could access the pantry more easily.”

It was noted that the city would be held liable for example, if the food items were expired or otherwise unsafe to eat. Dunaway said she would look more closely into the matter for further discussion.

In 2019, ICCTFOA added an Advanced State Certification option for their members. The certification requires education hours, experience, and professional and social contributions by the individual seeking the certification.

Montambo has served as the City Clerk/Deputy Treasurer for the City of Orofino since 1989. In September of 2019 she earned the Thirty Year Service Award from ICCTFOA.

Administrator Rick Laam presented an update on the saga of airport improvements. Work that was supposed to take a couple months to complete has seen quite a few hiccups. Almost three years later and though the seal coating of the runway, aprons, and taxi ways have been done, other issues are still unresolved.

The trees lining both sides of the airport must be removed, the river bank on west end of the runway is slowly eroding, and now a natural drainage ditch runs parallel to the runway. FAA holds a very strict policy of runway and airport conditions, there is no way around having the work done. The question is who is able to do it and how much it will cost?

For tree removal, the City has sent the job out to bid twice. The first effort produced no bids and the second round the bids were astronomically high.

FAA had pulled funding for tree removal and told the city to get it done, before the west bank of the river and the drainage ditch could be addressed.

Laam announced the city will be sending out a formal bid for the trees by the end of the month in hopes to have it done this spring. The city continues to be in close contact with FAA to complete the work planned.

Building Official Todd Perry said he had made an agreement with Josh Steiner of Fury Concrete to begin the city’s sidewalk repair near the city park as soon as the weather permits. There are two aging ADA ramps that will be replaced with newer ones to be located in a safer location and closer to the park. Work also includes a wheelchair accessible sidewalk to the dike.

The Federal Emergency Management Agency (FEMA) has recently approved Jerry Johnson’s plan to work on Orofino Creek at the former Tri-Pro mill site. A map showing the work to be done has been submitted. Letters will be sent to adjacent neighbors. Johnson is anxious to get the project started, but snow has been hampering the progress.

The Building Permit report for November 2019 was submitted by Perry.

Public Works Supervisor Shane Miller gave council members a report on snow removal, claiming it hadn’t been too tough this year. He was extremely pleased with the equipment and the use of four plows this year, (two pickup units and the two large trucks). Miller also sent kudos to his staff for their long hours and the awesome job they’ve done in keeping the roads clear.

Police Chief Jeff Wilson announced that he had a couple of items for which he wanted to share his appreciation. He recognized Orofino Police dispatcher, Lahni Ireland for all her work that went into organizing Christmas 911 and making it so successful.

In other news, Wilson noted that the community has had an unusual rash of burglaries taking place, to include the storage sheds on Odie St. and the Konkolville Motel. He asked for people to be more vigilant in locking up their property and to please report any suspicious activity.

Water/Wastewater Supervisor Mike Martin stated that his crews were busy with routine maintenance and operations. Martin added that they had changed the valves and pipes for the chemicals used at the plant, not because of poor quality but due to the fact that the chemicals take a toll on the equipment.

Fire Chief Jon Hoyt reported that while at a structure fire Dec. 25, it was discovered that one of the engines had an antifreeze leak. The new radiator had to be custom built and the engine is now up and running.

A council work session was held Jan. 7, to create a park policy for all who use the grounds can follow, so all parties have the same expectations when using the park arena and will be better able to put it back “at ground zero” before leaving.

It was announced that the double-sided reader boards have arrived, courtesy of Avista. The city, Avista and Idaho Transportation Department are still discussing a suitable location for placement.