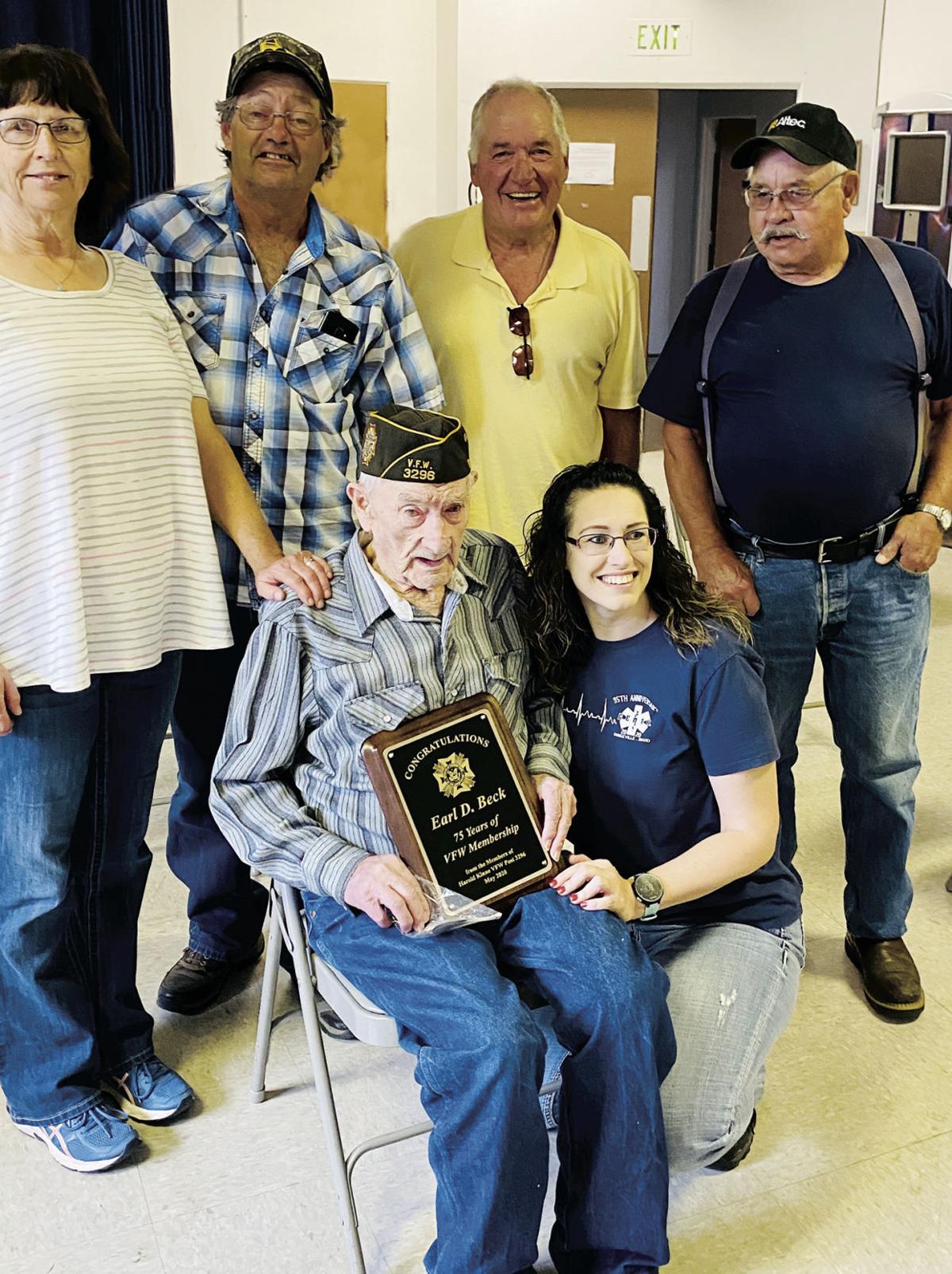 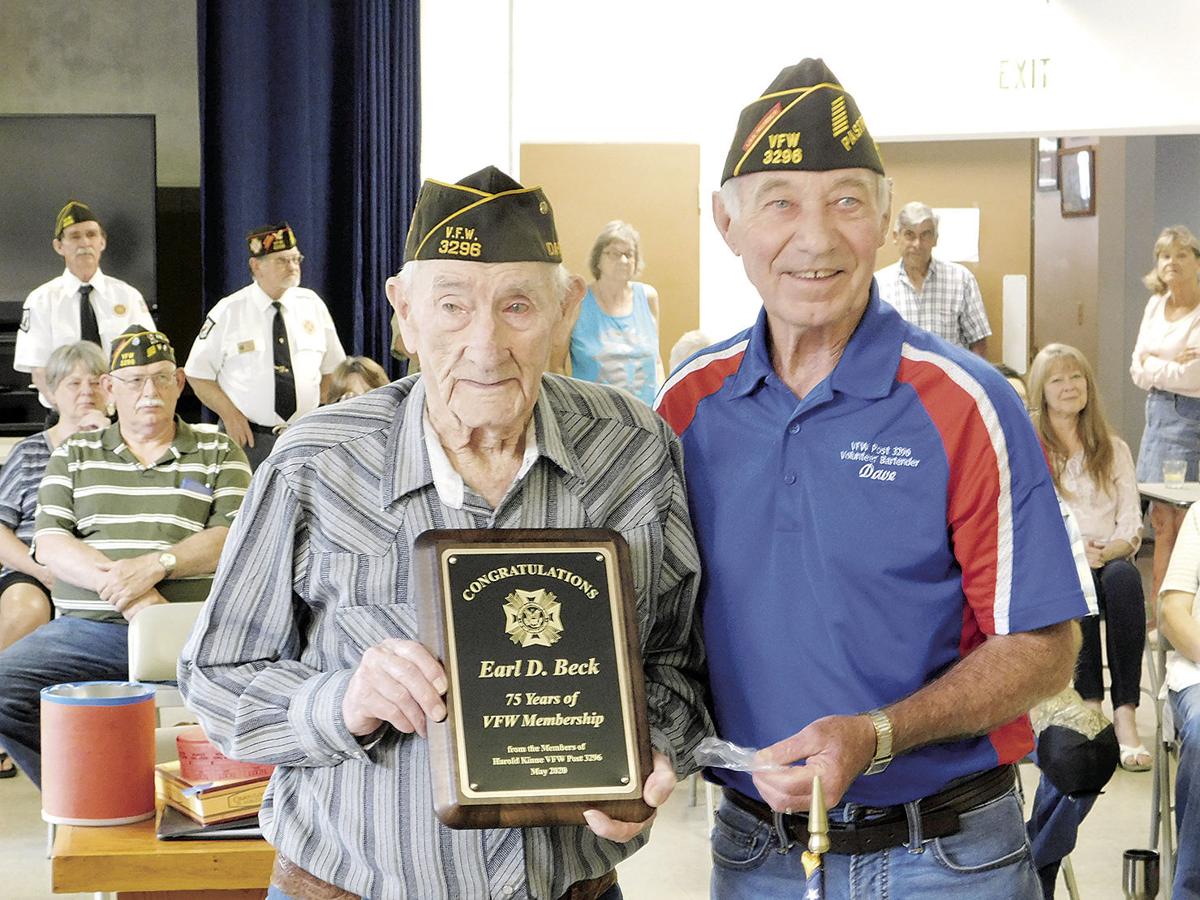 Before the construction of the Harold Kinne Veteran of Foreign Wars (VFW) Post 3296, Earl Beck remembers when the first VFW meetings were held upstairs in the Orofino Fire Hall, members later took over an old plumbing shop in the back rooms of the old Walrath’s Insurance offices. “We put in a bar with 11 slot machines which would eventually raise enough money to go toward building the current post.

‘It was a lively bunch back then,” says Earl, “the desk I sat at probably still has marks from the gavel I used to bring meetings to order. Eventually we had plans for a new post.”

The new building was constructed and Earl has remained dedicated and true to the cause of helping veterans throughout the decades.

Veterans and Auxiliary members of Post 3296 joined Earl, his family and friends on June 2 at the VFW Post to honor all the years of service to his country, his fellow comrades and his community.

Earl was born in the winter of 1924, in Tamarack, ID. The family left Tamarack the following spring and moved to Washington before settling in Wapato, WA. Earl was not quite 10 in 1934, when the family of five and one little bulldog moved from Wapato, WA, to Orofino via a covered wagon drawn by a team of horses. The journey took 11 and a half days.

Earl attended school at the New Hope school near the Ahsahka/Cavendish Grade and graduated from eighth grade. He admitted he had never attended high school, as he was needed at home to look after the farm while his dad was out working in the woods. In time, Earl worked in the woods and on various ranches until he was drafted into the Army at the age of 19.

The year was 1944 and Earl was sent to Camp Roberts in California for Basic Training. He was able to return home for a two week visit before having to report back to Fort Ord, CA. From there, Earl shared the unforgettable experience of transport by cattle car to Fort Lawton, Seattle, where he was shipped by Kaiser ship to Hawaii for additional training before being sent to Okinawa to unite with the 96th Infantry Division, following the 7th, and the 77th Infantry Divisions.

Earl was the platoon runner of supplies, ammunition, and messages from the company commander to the troops pinned down in foxholes along the ridge. ”I didn’t enjoy it one bit, but you do what you’re told to do.” He said he had made numerous trips up and down the ridge that day and was at the bottom of the ridge when he stepped on a mortar shell that would cost him his lower leg. “I was with the outfit two days less than a month when I got hit, but I decided to make the best of it. There was nothing courageous about it, I had to help my buddies.”

Earl spent nine months at Bushnell Military Hospital for Amputees in Brigham City, UT. It was there that he received intensive physical therapy and learned how to use his new leg. Each amputee had to have the authorization of the Colonel to be discharged. “I walked, and was asked numerous other times to walk before other officials.” He said he remembers overhearing the Colonel say, “I want all my soldiers to walk like that!”

While he was at Bushnell, Earl said he had the opportunity to shake hands and chat a few minutes with President Harry S. Truman as he came by to visit the troops.

Earl returned home and worked at the Mercantile here in Orofino. He married Dorothy Tierney in 1956, raising her son Rick, from a previous marriage as his own and fathered two more sons, Gordon and Dean. The couple divorced in 1968. He worked as a Sheriff’s Deputy for a couple years and with the State Highway Department for 22 and a half years, before retiring.

Snowmobiling is one activity Earl really enjoys, the other is fishing. He shares stories of fishing in various locations with his brother, to include Alaska, the Sea of Cortez and even Australia.

There’s no doubt about it, thick or thin, Earl Beck has spent a life time of service to his country and community and has definitely made the best of all life has to offer.