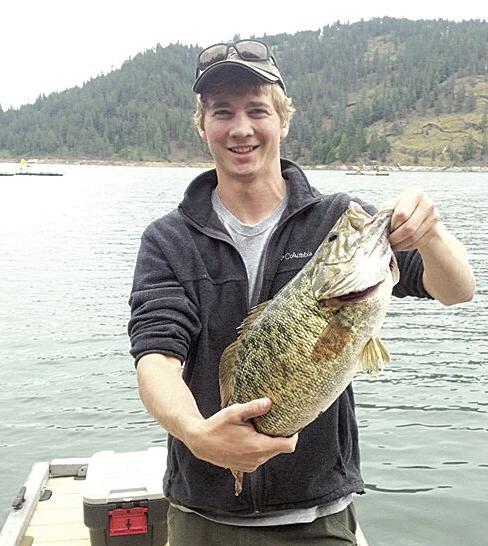 A large smallmouth bass tagged by Idaho Fish & Game after a tournament weigh-in on Dworshak Reservoir.

A large smallmouth bass tagged by Idaho Fish & Game after a tournament weigh-in on Dworshak Reservoir.

Although harvest opportunities for Chinook salmon will be limited this year in Idaho, that doesn’t mean you can’t put some fresh salmon on the table. Catching kokanee may not compare to fighting a huge Chinook, but they can provide a delicious alternative. If you’re an avid kokanee angler, you’re probably looking forward to filling your cooler with some tasty “blueback.” Either way, here’s what to expect if you fish Dworshak this year.

We expect around 700,000 adult kokanee this year if survival is average, which should produce high catch rates compared to the 400,000 fish average, or the 560,000 we estimated last year. Keep in mind there are many factors that can affect what the actual number of fish is compared to what we estimate. For example, if a bunch of fish are flushed out through the dam (also known as entrainment), or just don’t survive as well as expected, we may have a lot less.

Still, even if we have half as many as expected, which can happen, we should still come in close to an average year in terms of abundance.

The other side of the coin is fish size. As avid kokanee anglers know, more kokanee also means smaller kokanee. With that many more mouths to feed, we should expect slower growth this year. Fortunately, these fish got a good jump on growth last year. As of this March, kokanee were averaging almost 9 ½ inches in the fishery. In a year with lower densities, I would expect these fish to be 11 to 12 inches by summer. However, with a record number of age-one fish on their tails, I expect these fish will fill out as the plankton blooms and feed is more plentiful, but they may not put on much length this year.

If you fish early on, before the water warms up, remember that the kokanee can be very shallow. On a recent trip, almost all the fish were caught longlining with no weight, or 70 feet behind a downrigger that was only down seven feet or less. It’s also unlikely to mark fish on your fish finder when they are up shallow, so try fishing likely places even if you’re not marking fish, and be on the lookout for fish hitting the surface. As the water warms, the fish will go deeper and be easier to mark. However, kokanee can come up shallow to feed at almost any time of year, so it doesn’t hurt to run a shallow setup even when you’re marking fish deeper.

Bass anglers rejoice! The primary prey for big Smallmouth is kokanee. The more abundant the kokanee, the bigger the bass will get. This year should be as good as it gets for growing bass. While the fruits of this growth tend to lag a year, bass fishing should start getting better this year, and only continue to improve as we move into next year. The last time we had this many kokanee in the reservoir, the state record was nearly broken. With even more kokanee, maybe we’ll see a new record in the next couple of years. So if you like to catch big Smallmouth, Dworshak should be on your list for these next couple of years.

Whether you are looking to fill your cooler with kokanee or land a trophy Smallmouth, opportunities abound at Dworshak Reservoir. So stop thinking about it. Load up your gear, hitch up the boat, and go fish Dworshak.