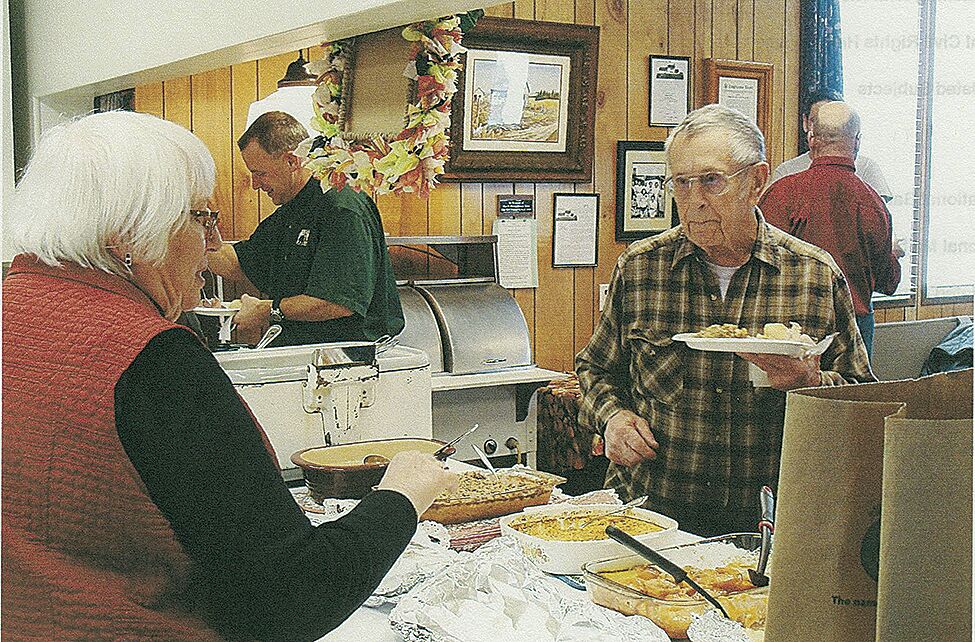 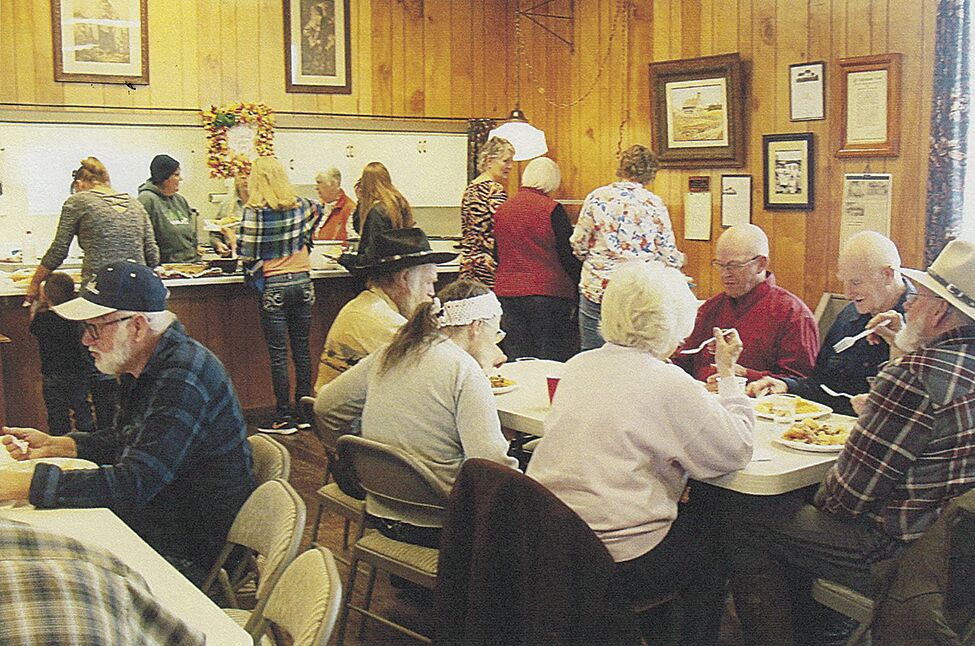 The Thanksgiving Potluck Dinner at the Fraser Community Center.

The Thanksgiving Potluck Dinner at the Fraser Community Center.

The weather for the first part of the month of November has remained on the cool side with very few days of sunshine. We have had snow, night time temperatures have been in the 20 – 30 degree range, and several days have been very windy.

An article in the Capital Press predicted that the Northwest could expect a wet winter this year.

Our yard is covered with dead pine needles and small branches from the evergreen trees. We did lose one big branch from the red fir tree on the south side of our property. The wet snow caused it to bend down, which probably weakened it, and the next windy day it landed on the ground.

As I look out at the fields, the winter wheat that was seeded before the weather turned, is now visible. Maybe it will snow again before the temperature drops below freezing.

The Fraser Get Together Club held their Thanksgiving Potluck Dinner on Wednesday, Nov. 11, at 12 o’clock noon.

The wood stove was burning when everyone arrived, thanks to Jeff Sauter.

Anne volunteered to fill in for Sally Marks, and was in charge of baking the turkey.

It was good to visit with Diane Cochrell. She is now working out of the Weippe Post Office and had the day off due to Veterans Day.

Dolores Watson’s brother, David Thomas, joined the group and enjoyed the meal and visiting with everyone.

Christi Parker stopped in and Tammy and Jeff Sauter brought their granddaughter, Natalie Drinnon. Natalie and her family live in Helena Montana.

Bonny Kinney gave Jeanette Joiner a ride and we sat at her table and had a good visit.

Vern Kinney gave the blessing and then it was time to fill our plates with all the delicious food.

Marge and Craig Comstock were unable to attend, but sent an apple/cranberry pie for everyone to enjoy.

It was a good turn out and everyone had a good time.

The next regular meeting will be on Wednesday, Dec. 9, at 12 o’clock. We will bring our own lunches and the Community Center will be decorated for Christmas.

The Fraser Community Christmas dinner will be held on Saturday, Dec. 12, at 12 o’clock.

An article in the history section of the Epoch Times issue for Nov. 5-10 caught my attention. It was entitled “Remembering Warwick Charlton, Builder of Mayflower 11”, written by Lawrence W. Reed.

The original Mayflower arrived in America on Nov. 9, 1620.

This month’s 400th anniversary of the Pilgrim’s landing in New England will prompt renewed interest in their story.

Warwich Charlton was born in London in March of 1918, he became interested in the original passage when he read the only available book on the boat entitled “Of Plymouth Plantation 1620 – 1647”, by the Plymouth Colony’s governor, William Bradford.

At the time he was working a quarter of a century later as a press officer for the Field Marshall Bernard Montgomery in North Africa as allied troops battled the Nazis.

When the war ended he thought, “Why not show appreciation for America’s contribution to the war effort by presenting them with a facsimile of the Mayflower.”

The article went on to tell how he raised the money for the venture, even though he ran into heavy opposition.

Once he had raised the money he insisted that the shipbuilder use the tools and material identical to those used in the seventeenth century.

On April 20, 1957, the completed Mayflower 11 set sail for Massachusetts from Brixham in southwest England. Aboard was Charlton and a crew of 33 dressed as Pilgrims. The voyage took just 554 days, 11 days fewer than the first one. Upon arrival, the vessel and crew were greeted by a throng of 100,000, including Vice President Richard Nixon and Senator John F. Kennedy.

The Mayflower 11 was Warwick Charlton’s way, privately, enthusiastically, and without harming any taxpayers, of proclaiming his gratitude to America. He gifted the ship to America for the nominal “fee” of $1.

Recently restored for the upcoming 400th Anniversary Ceremonies the Mayflower 11 still resides today near famed Plymouth Rock where Warwick Charlton left it over six decades ago.

The telegraph in London recounted his efforts, as part of his obituary, after he died in 2002.

We will celebrate Thanksgiving on Thursday, Nov. 26. The Mayflower and it’s passengers called the Pilgrim’s gave thanks for all they had on the first Thanksgiving Day in America. Let’s remember what we have to be thankful for as we celebrate this day.

Happy Birthday Greetings go out to Dolores Watson on Nov. 29.

Happy Anniversary Greeting go out to Mark and Karen Fowler on Nov. 27.