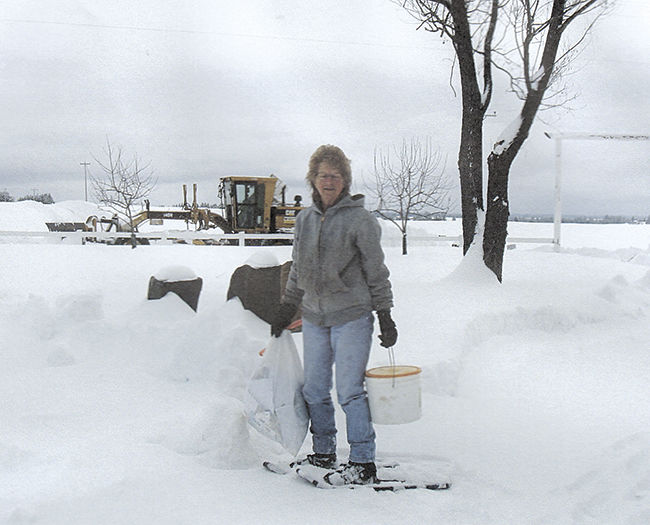 The Clearwater Highway District grader handles the snow on Lower Fords Creek Road while Norma Brand straps on snowshoes to get around at their home in Fraser. 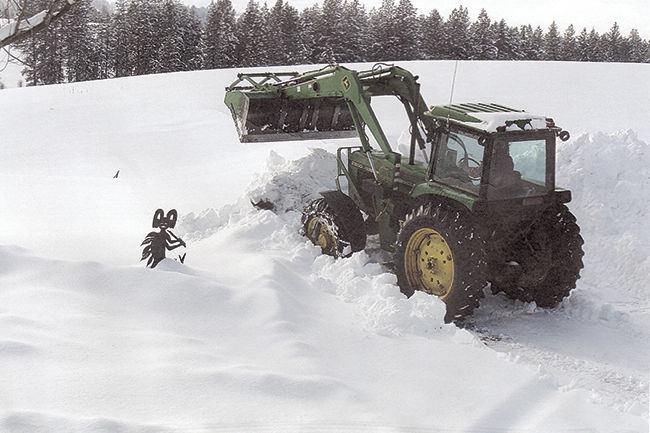 Steve Brand had to chain up the front wheels on their John Deere Tractor to clear the snow from their yard.

The Clearwater Highway District grader handles the snow on Lower Fords Creek Road while Norma Brand straps on snowshoes to get around at their home in Fraser.

Steve Brand had to chain up the front wheels on their John Deere Tractor to clear the snow from their yard.

Last week I had commented that it looked like February was going to be our snowiest month this winter and that does look to be correct. When the sun made an appearance on the last day of the month it was great to spend some time outside.

The snow was so deep I had to strap on snow shoes to carry the pail to the compost pile and the trash to the storage shed. Even with the support of the snow shoes I sank down about 6 to 7 inches because the snow was so light and fluffy. Steve snapped a picture of me just as the Clearwater Highway District came by with the grader to clear off the gravel road one more time. We haven’t had any more snow so the gravel roads have been in really good shape.

We visited on the telephone with Steve Green on Monday morning and he reported Coeur d’Alene had 15 inches of snow. His brother Mike is still at his home in Wallace, he tires quickly so visitors are only staying for 15 to 20 minutes. He and Carol enjoyed spending three days at the cabin before heading back home. They appreciated having the deep snow plowed out of their driveway by Marvin Watts.

Bev Bailey reported they had a good day at the Rally with Young Living Essential Oils on Saturday. The first prize raffle was won by Robin Topp of Lewiston, the second raffle was awarded to Lauri Stifanick from Orofino and Tracy Weese from Pierce took home the third prize.

Comments have been coming in on the article about Jason Cochrell’s 1961 Jeep. Ellen Tomlinson remembered when they were living at Headquarters they were acquainted with Roy and Mary Cochrell. Ken Carlson had looked over the Jeep when he had stopped in at Jason’s shop. It certainly is something to be proud of; we hope to see it at the Show and Shine this summer.

On Sunday, we saw the huge rockslide on Highway 11 just before we arrive in Greer. The debris had been cleared off the road, but it looked like it had traveled clear across both lanes of traffic. An enormous boulder is part of this slide; it will be interesting to see how the state road crews clean this up.

I spoke to Donna Brown and she remembered that another slide happened in this area a number of years ago. The moisture seeping out of the rocks and the cold temperatures must have had some affect; we will have to be aware that there could be more slides as the cold weather continues.

After seeing the rockslide we continued on to Orofino to attend the Spaghetti Feed Fundraiser at St. Theresa Catholic Church. The money will benefit the restoration of the Our Lady of the Woodlands historical church in Pierce.

We did enjoy the spaghetti feed. Ken Carlson was part of the crew that put on the dinner and the women of the Catholic Church held a bake sale. Marge Carlson baked 25 loaves of sourdough French bread to go along with the spaghetti and the salad. All the proceeds were donated to the fundraiser.

We visited with Lynn and Mike McCarthy as we enjoyed the tasty food. I spoke with Ken on Monday and commented on the sauce, we love a thick sauce on our spaghetti and this was exceptional and of course we brought home some dessert to enjoy later. Great job everyone.

Sherry’s Cakes and Bouquets will have two different sizes of Shamrocks for St. Patrick’s Day, also assorted green flowers and handcrafted cards. Give Sherry a call at 208-435-4793 before you drive out to her new location at 12997 Lower Fords Creek Road. Once the snow is gone she plans to contact the “powers to be” about erecting a sign by Highway 11 and at her new location.

I enjoyed visiting with Jerry Linville on Monday.He reported they have about two feet of snow around their house on Thornton Road.

The Fraser Get Together Club will hold their regular monthly meeting on Wednesday, March 13. The hostesses are Rosena Aultz and Sally Marks and the theme is St. Patrick’s Day so wear something green. The lunch will be served at 12 o’clock with the meeting to follow, guests are welcome.

The Fraser Community Center Board will hold a meeting after the Club adjourns.

Shirley Lutes called last week and wondered how we were handling all the snow this year. Her family helps knock down the snow on her driveway, she is thankful that Lewiston doesn’t get much snow.