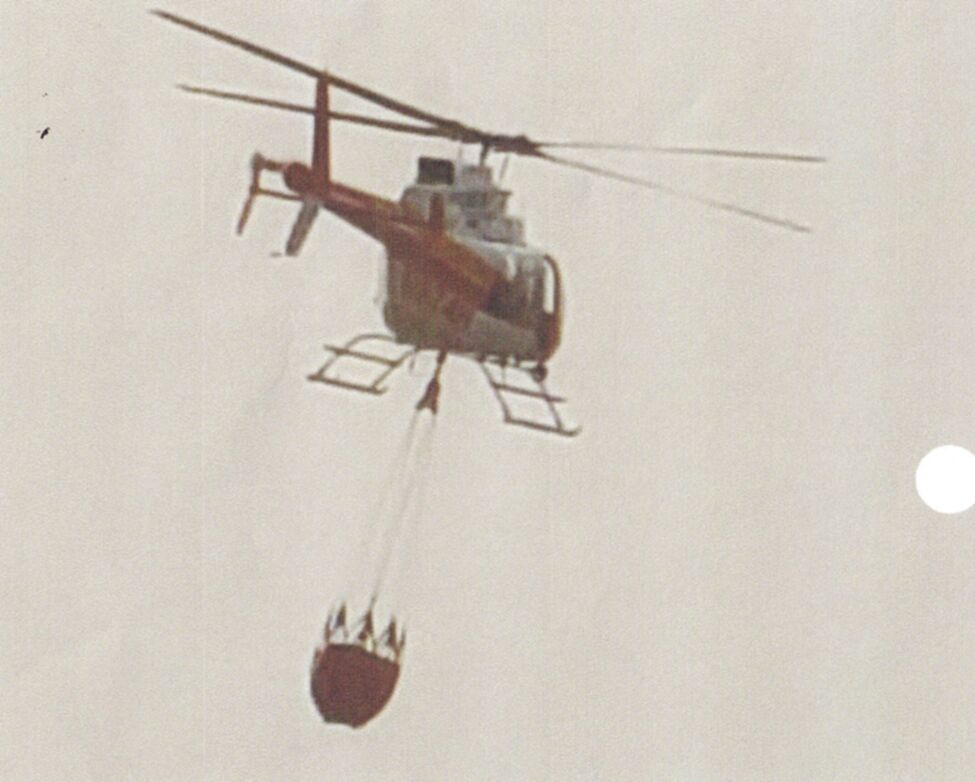 Apache Helicopter dropping water from the lower pond at the Beard home. Fish and Game put this pond in to help with fire after the big burn in 2015. 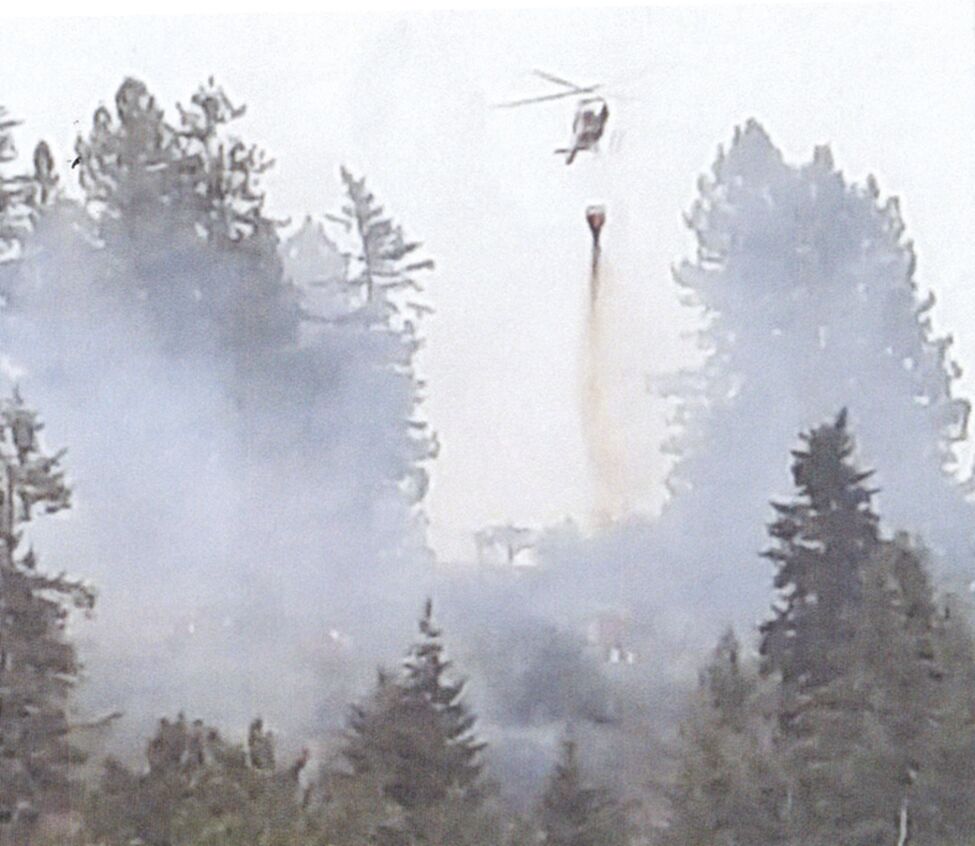 Cindy Yantis caught this photo of the Apache Helicopter dropping water on the wild fire south of Hwy 11. 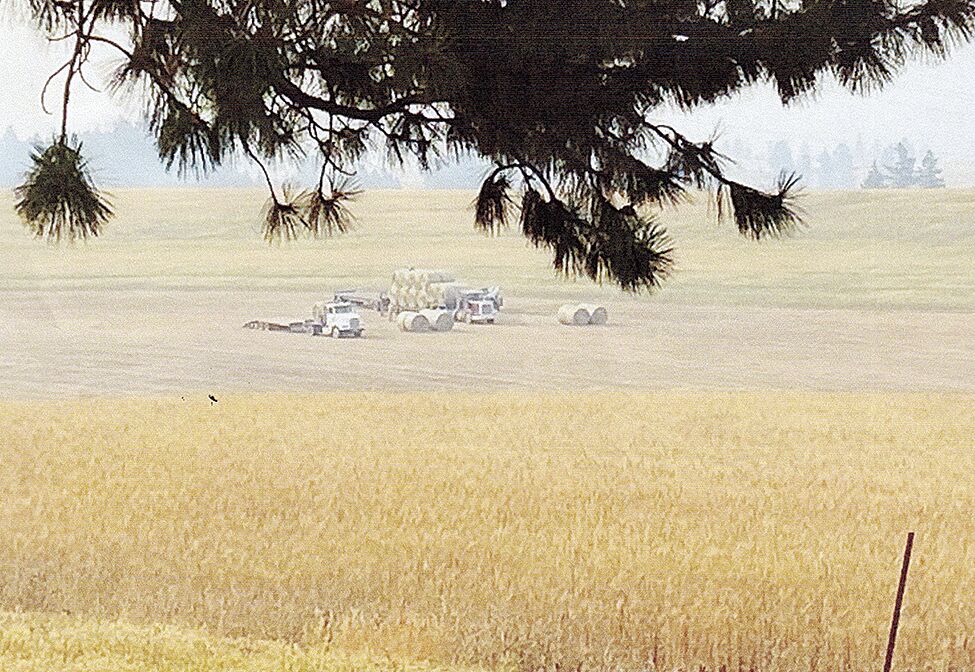 The Brown Farm loads up the round bales on Lower Fords Creek Road.

Apache Helicopter dropping water from the lower pond at the Beard home. Fish and Game put this pond in to help with fire after the big burn in 2015.

Cindy Yantis caught this photo of the Apache Helicopter dropping water on the wild fire south of Hwy 11.

The Brown Farm loads up the round bales on Lower Fords Creek Road.

The air in Fraser Community remains very smoky, which causes the sun to appear red. It is amazing to see this big red ball appear in the eastern sky in the morning, and then in the evening to watch it drop over the horizon. The smoky atmosphere has cut down on the intensity of the sun’s rays which has kept our temperature from hitting the triple digit range. Something to be thankful for!

On Wednesday, July 14, a wild fire was reported on Hwy 11, near mile marker 7. It started around 5:30 p.m. when sparks from a vehicle’s catalytic converter caught the dry grass and weeds on the side of the highway on fire.

Lanis Aultz called me about seeing the smoke from their home on Four Mile Road and wondered where it was.

A telephone call to Linda and Mike Beard confirmed that the fire was coming up a draw near their driveway. Linda reported that four helicopters were drawing water from several of their ponds to control the fire. CPTPA and the fire departments from Greer and Weippe were fighting the blaze and the Brown Farm used their big water truck to refill the fire departments equipment. The fire did get into several wheat fields but was extinguished before too much damage was done. The quick response from everyone had a big effect on how this wild fire was handled. It was nothing like the one that burned in the Lolo Canyon in 2015.

Linda Beard also reported that the Greer Fire Department held a fundraiser last Saturday and Sunday. They set up a stand in Greer and sold snow cones to raise money for the department. The gals send a BIG THANK YOU to all who stopped for a treat and to the generous donations they received. They plan to hold this fund raiser again, so watch for their snow cone stand as you drive through Greer.

Donna Brown reported their granddaughter, Chelsie Moreland and her children arrived from their home in Nebraska on Saturday. Chelsie scheduled time with Abby Brown to take her graduation pictures before traveling on to Culdesac to visit with her parents.

Danny’s brother Neil and his wife Sherry arrived at the farm for a visit on Wednesday. They were accompanied by their grandchildren Matilda and Leora. This time they brought their camper and parked it by the pond in the canyon. Danny and Donna had breakfast with them each morning and one evening hosted the family for dinner. They returned to their home in Pendleton, OR. on Sunday.

The hot, dry weather has affected the hay crops this year. It has been reported that the yield is significantly down from last year.

A recent article by Rep. Dan Newhouse, a Republican member of the U.S. House from Washington state appeared on the Opinion page of the Capital Press. It was entitled, “The Pacific Northwest agrees – Keep your hands off our dams.” He referred to Rep. Mike Simpson’s proposed Columbia Basin Initiative to breach the lower Snake River dams in an attempt at boosting the native salmon population – while reportedly ignoring the very real issues, and solutions that are impacting our fish populations. He reported in the state of Washington, our dams along the Snake and Columbia rivers have fish passage rates in the mid to upper 90 percentiles and utilize some of the most state-of-the-art fish passage technology ever developed.

At the Ice Harbor Dam, world-class scientists are not only in the process of replacing all the dam’s turbines with new fish-safe technology, but they are using this dam (one of the four dams proposed for breaching) to conduct critical research on fish passage that will shape the way the world builds dams with the highest possible rates of fish survival.

The article went on to address the reasons for the decline in the native salmon population. All the issues collectively impact salmon populations, and based upon the scientific information stemming from these actual impacts, the National Oceanic and Atmospheric Administration has already developed the strategic plans to address these historic impacts and the current challenges facing the species today. He went on to say, “Why are we trying to reinvent the wheel when the guidebook is already in our hands?”

Rep. Newhouse finalized the article with the benefits the dams provide. This article can be read on the Opinion page of the Capital Press.

Happy Birthday Greetings go out to Linda Jackson on July 30, and to Heather Sutton on Aug. 3.