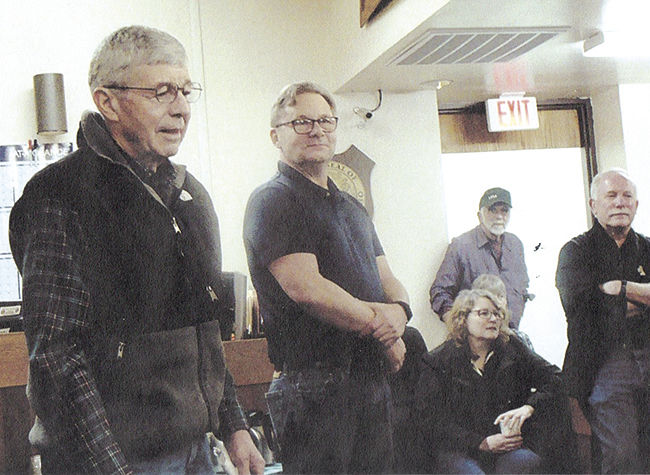 At Don Ebert’s reception on Jan. 11 John Allen talked about serving with Don as a commissioner for Clearwater County. 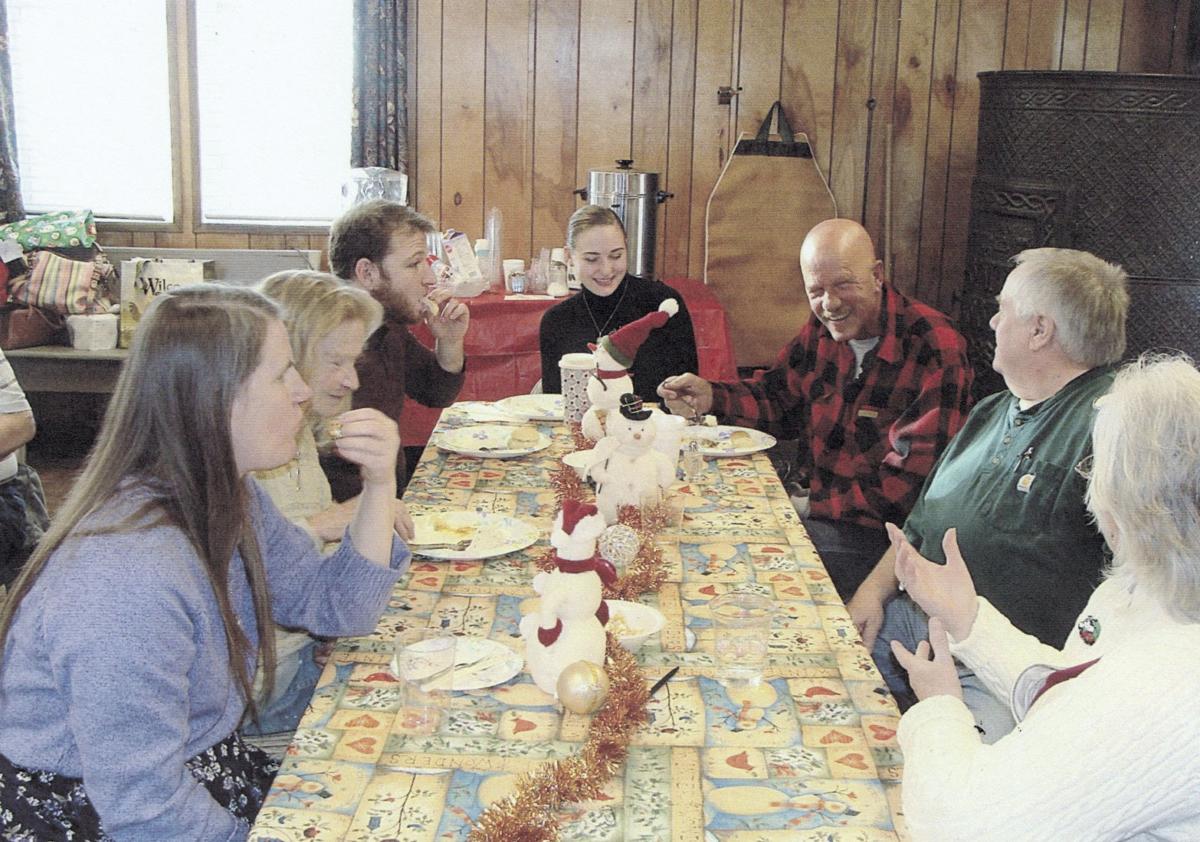 Dec. 2018 - Randy and Carol Skinner and their grandchildren visit with Bonny Kinney and John and Sally Marks at the Fraser Christmas potluck dinner. 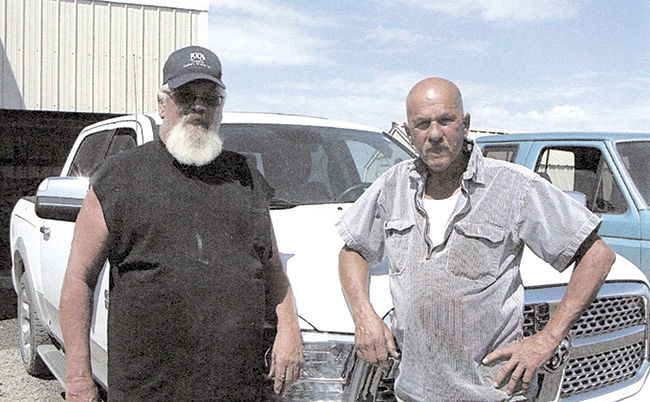 Kevin and Randy Skinner worked on the parking lot at the Fraser Community Center.

At Don Ebert’s reception on Jan. 11 John Allen talked about serving with Don as a commissioner for Clearwater County.

Dec. 2018 - Randy and Carol Skinner and their grandchildren visit with Bonny Kinney and John and Sally Marks at the Fraser Christmas potluck dinner.

Kevin and Randy Skinner worked on the parking lot at the Fraser Community Center.

The winter season in the Fraser Community has been mild with very little snow. Day time temperatures have been between 31 and 40 degrees and over night we have experienced as low as 21 degrees. The moisture content must be high, which causes a sense of being chilled to the bone. We are not complaining about the lack of snow right now, although when summer arrives we may wish Old Man Winter had been more generous with the snow storms.

The members of the Fraser Get Together Club were treated to another event at the Kinney home. Blanche and her daughter Sarah prepared a lunch of sandwiches, chips, veggies, nuts and cookies for everyone to enjoy. Sarah took the club on a tour of their new addition which was completed during the past year. During the afternoon, everyone enjoyed a good visit and were able to catch up on family news. The November and December meetings were dedicated to family potluck celebrations which consumed the time spent together at each event.

The club decided at the December meeting to change the meeting time to 12 o’clock with lunch being served before the meeting is called to order. This is a real change from the way the club originally held their meeting. This change will help with the evening meal preparations for the families of the members. The next regular meeting will be held on Wednesday, Feb. 13 at 12 o’clock. Peggy Ball and Dawn Cloin will serve as hostess.

On Wednesday Cory Supak telephoned Steve Brand. He needed some logs moved so he could use his tractor. The John Deere made quick work of this problem.

I had a nice visit with Sandy and Gerry Linville last week. Sandy reported that Gerry was feeling better and that they were staying home and keeping warm. We discussed the yellowjacket problem we had last summer and I shared the advice I had read in the Extension office report about setting out queen traps in March and April when the queens start to build their colonies. The trapping of the queens eliminates the hives for it stops the inevitable cycle. I plan to follow this advice and hope for the best as we enjoy eating our meals outside.

I spoke with Carol Skinner on Thursday of last week and she reported that her husband Randy had passed away on Wednesday, Jan. 9. Randy was renting the late Marie Green’s home on Green Road from the Brown Farm. He took such pride in keeping the yard in perfect condition and enjoyed visiting with anyone that stopped in. The Fraser Community Center Board hired him for handyman services and he did an excellent job of keeping the building in good repair. He even stripped the finish off the old wood flooring in the main part of the building and refinished it.

Randy’s services were held on Sunday, Jan. 13 between 1:30 and 3 p.m. at the Church of Jesus Christ of Latter-day Saints in Orofino. Steven and I joined Randy’s family and friends to honor his passing. Randy’s grandson, Randy, shared how his life was impacted during the time he spent with his grandfather before joining the Marines. Randy will be buried in the Turner Cemetery at Soda Springs, Idaho with a full military service. Randy was a wonderful neighbor and he will be missed.

Don Ebert was elected in 2002 to serve as a Clearwater County Commissioner. Steven and I remembered when he and Stan Leach spoke at the Fraser Grange meeting about their intention to run for this position. Don was a little nervous as he spoke to the members and asked for their support. He was elected and served 16 years in this position. We drove down to Orofino on Friday afternoon to attend the reception in his honor. The reception was held in one of the courtrooms to accommodate the space needed. John Allen spoke about the time he served with Don and several other community members added their comments.

Clearwater County has benefited from Don’s dedicated service. Good luck as you make the transition back into private life. We do appreciate the service and time you gave to this county.

I have come to depend on my laptop computer to write this column and to record the minutes of P.E.O. Chapter CD and the Fraser Community Center Board. Last month it started to fail. Our son, Randy, advised us to have an expert look it over. I enlisted the help of our local computer company to look at this problem. Dan at the Computer Guys in Orofino diagnosed the problem and tuned it up. Boy was that a relief! Now I don’t have to worry that the program will lock up again. Nothing is more frustrating than to lose a document that was almost finished. Thanks Dan.

I visited on the telephone with Shirley Lutes last week. She is doing fine and hopes this New Year will be better than the last one when she lost several family members.

Happy birthday greetings go out to Monte Vanderpool on Jan. 18, to Jason Cochrell on Jan. 21, and to Cathy Walker on Jan. 22.