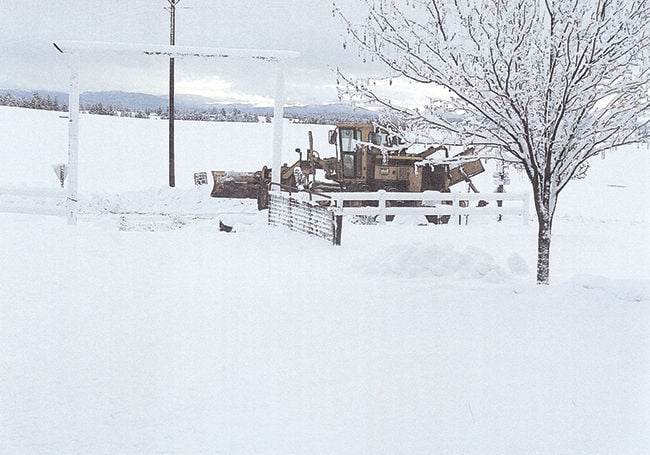 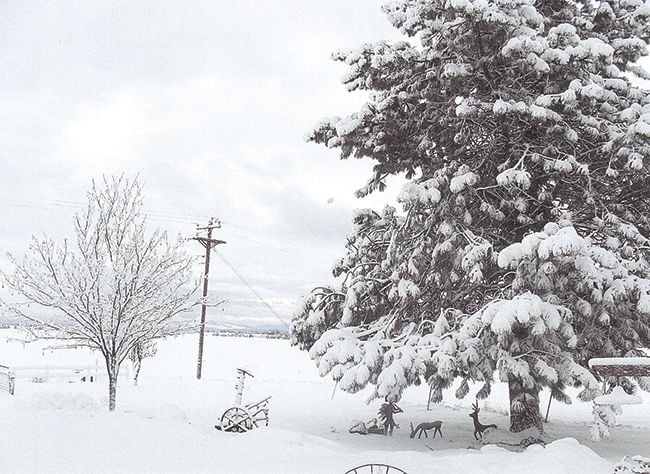 Snow scene from the Brands’ on Lower Fords Creek Road.

Snow scene from the Brands’ on Lower Fords Creek Road.

Winter continues to hold our community in its grip; snow and fog have been part of each day for over a week. The Clearwater Highway District employees have put in many long hours to keep the roads clear of snow that has piled up due to wind. On Tuesday, Feb. 12 Steve plowed the snow drift out of our driveway with our John Deere tractor so we could get out to the road. We drove down to Orofino and had to bust through deep snow near Kirk and Rhonda Gangewer’s farm. The wind drove the snow up over the banks on the south side of the road and visibility was just about zero.

When we returned at the end of the day, a big drift had formed again by the gate posts. Our Toyota FJ Cruiser made it through the drift thanks to the 4-wheel drive.

Wednesday morning, Feb.13, was a busy day at the Fraser Community Center. First Steve met Paul Nelson, the plumber, who did the work when the building was remodeled for the indoor bathroom. He checked out the water leak on the pipes to the kitchen sink and plans to return next week to repair the problem. Until the problem is fixed, the shut off valve for the main water will be turned off.

Aaron Newman from the Clearwater Highway District was already at work plowing out the driveway and the parking lot at the Fraser Community Center when Steve arrived to open the building and start the fire in the wood stove. He suggested that Aaron just plow next to the building as there wasn’t going to be many cars at the Get Together Club meeting, while he shoveled the snow off the steps.

Before Aaron continued on his way he was given a tour of the community center, he had never been inside the building. Aaron, thanks for plowing the driveway and for clearing snow from the area next to the building, we really appreciated it. The Fraser Get Together Club held their regular monthly meeting on Wednesday; the hostesses were Peggy Ball and Dawn Cloin.

The Christmas tree was taken down before lunch was served and put in the storage shed until next year.

The members were treated to a lunch of chicken hot dish, salad, rolls, and a tasty dessert, punch and coffee before the meeting.

The meeting was called to order by President Blanche Kinney, the minutes for the last meeting were read and the treasurer gave her report. A Thank You card from Dyane Spence was read. Cindy Rose and her son, Gunner, were guests and Cindy was welcomed as a new member.

Marge Carlson reported on the upcoming fund raiser for the Old Catholic Church in Pierce. A spaghetti feed will be held on March 3 to help with the restoration of the building. The Camas Festival has been cancelled; the Pancake Breakfast and the Horse Shoe Tournament will still be held.

The next meeting will be on March 13, the hostesses are Rosena Aultz and Sally Marks.

The minutes of the last meeting were read and the treasurer gave her report. Under old business Norma reported that the Weippe Fire District filled the water tank and Nolan Cochrell was contacted about the electrical box in the crawl space, he explained how that outlet worked. A Big Thank You goes out to Tony Christopherson, Nolan Cochrell and Paul Nelson for their assistance at the Center.

Bev Bailey reported the Red Hot Rally with Young Living Essential Oils will be held on Saturday, March 2 in the Banquet Room of the Fiesta En Jalisco Restaurant in Orofino. The Rally is sponsored by Jenna and Scott Roland, Kim Cox, Taylor McIntosh and Bev Bailey. There will be product samples, education, raffles and give aways. Call Bev at 208-435-4539 for more information.

Remember to watch for information on the Annual Multi Family Yard sale at Creative Gifts on April 6 from 9 to noon.