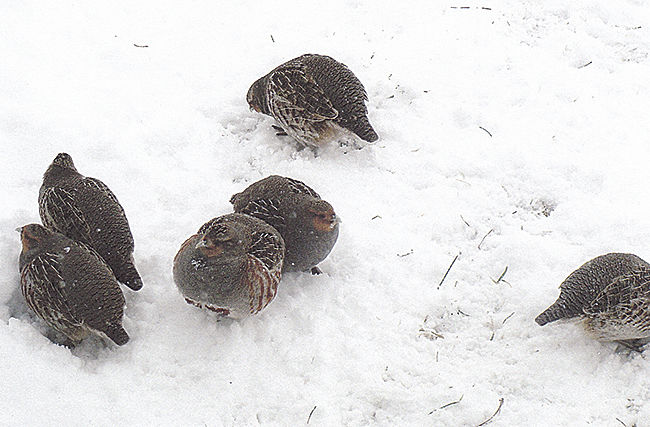 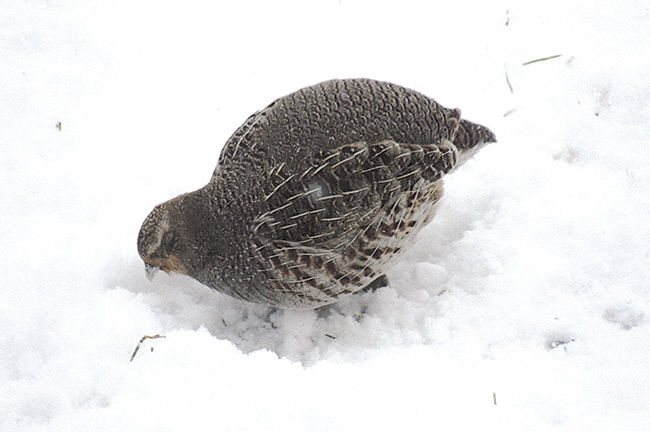 Hungarian Partridges feeding by our house.

Hungarian Partridges feeding by our house.

Old Man Winter has continued to conjure up an abundance of snow storms for this part of Idaho. This past week we have had snow almost every day. As I looked at my records for the past 8 years I found that the month of Feb. In 2012 had 12 days when snow had fallen. It looks like this year could top that record. I must admit that our pristine white world is absolutely beautiful. It looks like an old Currier and Ives painting with the flocked trees and bushes.

On Monday morning we met Jake Armitage at the gas station, the Highway District crew had been our all morning clearing the snow off the roads. We thanked him for the good job they were doing during this snowy month of Feb.

We also met Steve Green who was in Weippe getting supplies. Carol had made the trip with him; they were spending a few days at the cabin.

One morning this past week, I looked out our dining room window and enjoyed watching a flock of 8 Hungarian Partridges as they scratched away the snow to find something to eat. We haven’t had many varieties of birds at our feeders this winter so it was a pleasure to observe them; they were so busy they didn’t even notice that I was snapping pictures of their activities. When they moved on, they left an impression in the snow that was the same shape of their fat little bodies.

I traveled to Grangeville on Saturday to attend a Founders Day event for our P.E.O. Organization. It was snowing as we headed toward Highway 11 but once we arrived at Greer it had let up. I joined Chapter CD members Kenda Tribble, Gini White and Ellen Tomlinson for the trip while Lin Cannell, Julia Irby and Belinda Stockton traveled with Jo Sharrai.

The Grangeville Chapter AC hosted the event at “The Gallery” and Lewiston Chapter AR presented the program. Founders Day is dedicated to the seven college girls that formed this organization on Jan. 21, 1869 at Wesleyan College in Mount Pleasant, Iowa. Anyone interested in more information about P.E.O. please contact Chapter CD President Ellen Tomlinson at 208-476-4107.

Did anyone notice in the “Tribune Glimpse of the Past” the picture of the biggest load of lumber that was brought down the Old Greer Grade by the team of horses? The load came from the Samson Snyder Mill at Fraser in 1908 or 1909. Stories are still told about how steep the old Greer Grade was.

Happy Birthday Greetings go out to Gunner Dean Denison on March 3, to Lisa Dahl on March 4, to Jerry Bordoni on March 7, RoseAnna Thornton on March 11 and Caresse Brown on March 13.