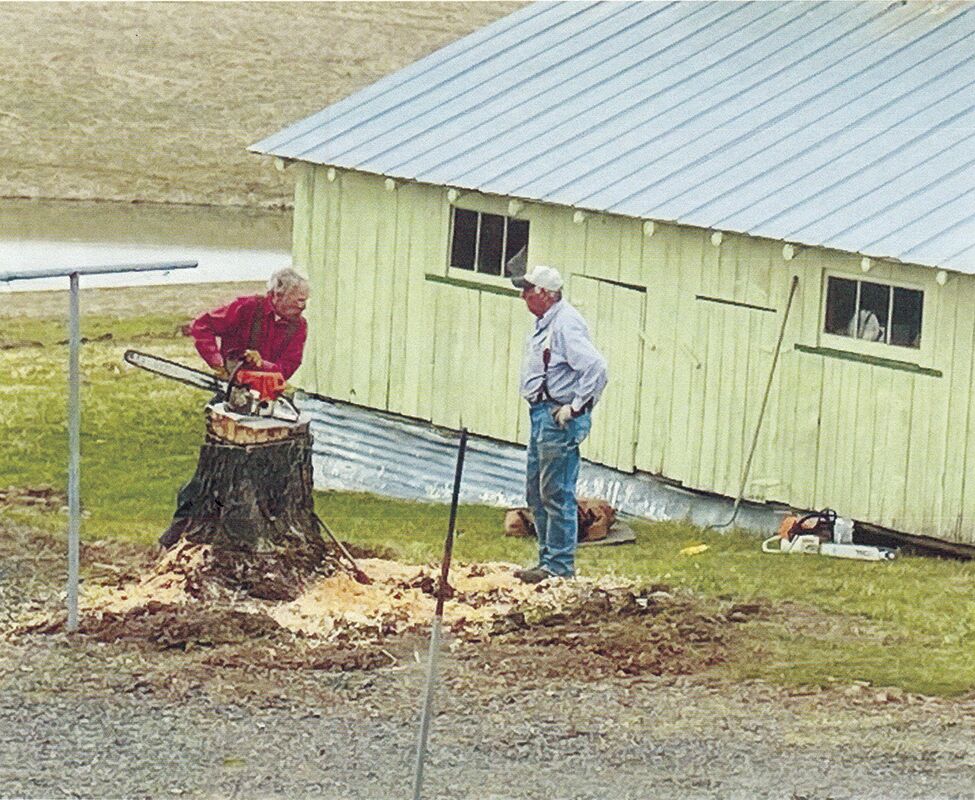 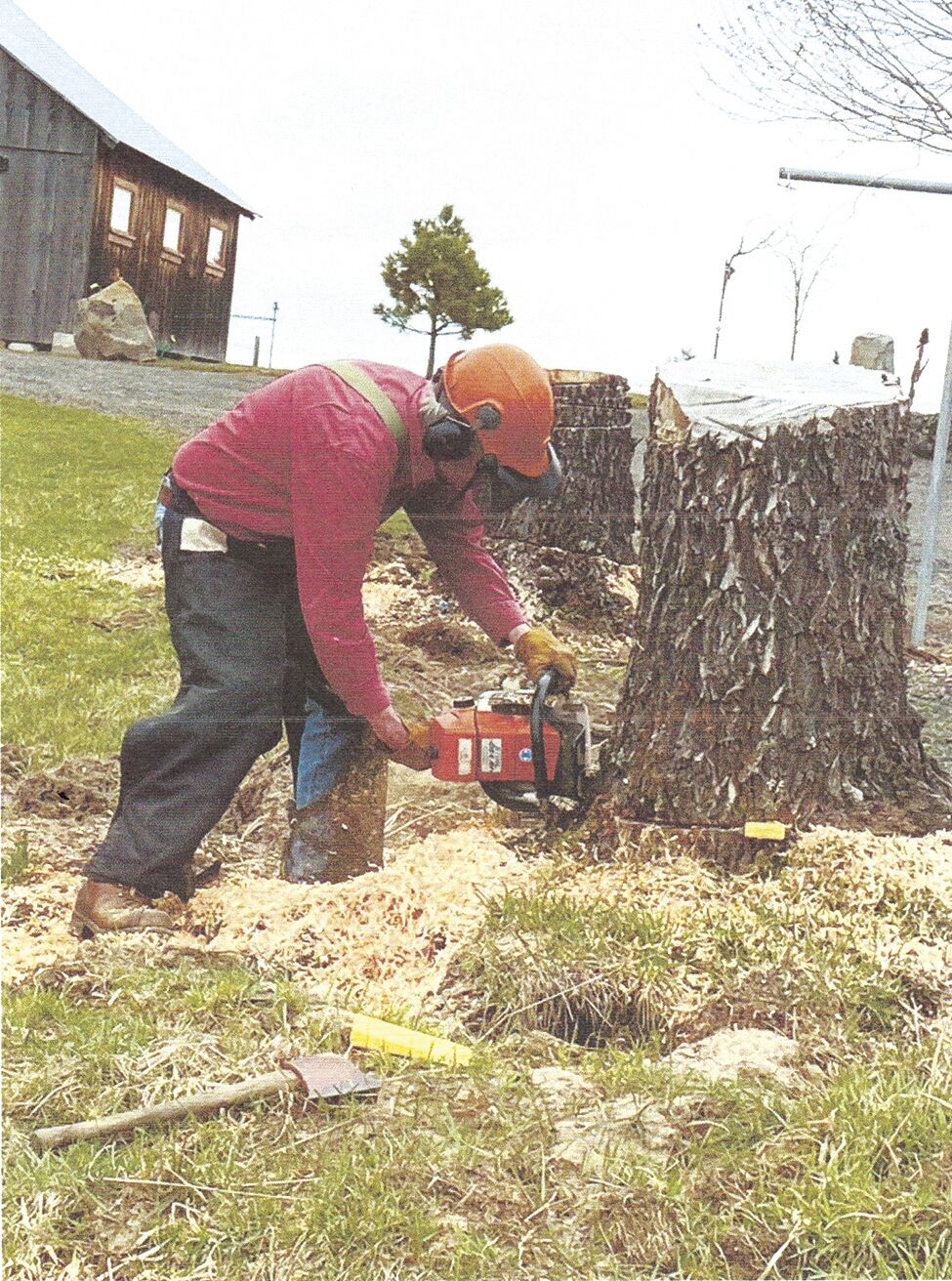 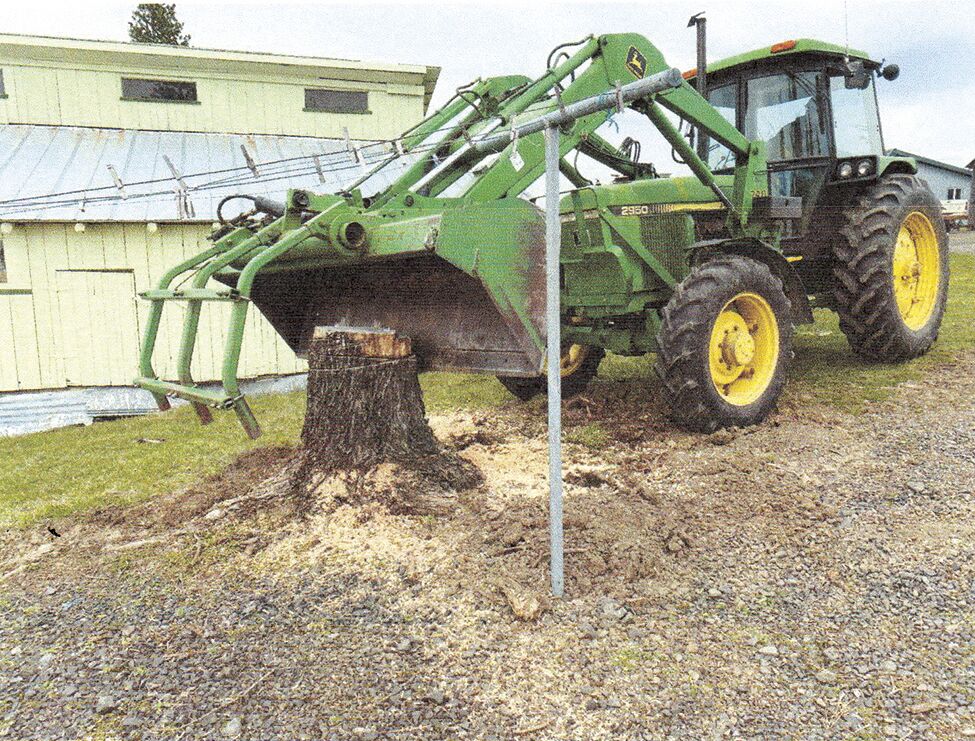 The John Deer tractor is used to move the stumps to the splitter.

The John Deer tractor is used to move the stumps to the splitter.

The March Lion’s roar was NOT heard as the month of March came to an end. We had five days of sunny weather and then, on Monday April 5, we were hit by a brief snow shower in the morning.

The overnight temperature had dropped to 32 degrees and as the cloudy skies began to break up around noon the day time temperature climbed up into the 40 degree range. The forecast is for showers for the next couple days.

Donna Brown reported spring work has started for another year. The fertilizing of the farm has started on the fields on the hilltop.

I visited on the telephone with Wanda Strong on Monday. I have asked her to give me the story about her parents, Bob and Jane Grangewer. She plans to visit with one of her sisters this week and will let me know about the photos and the information they have decided on.

Wanda shared that the last big wind storm had blown the back porch off of Bob’s house. The insurance company has been contacted and Ron Larson will give them a bid on the cost.

Jean Bennett reported that she and Darrel enjoyed a visit from Cathy and Dave Daniels last week. The Daniels brought their motor home to Lenore and parked it at their place so they could escape from the winter weather on the hill. I can’t say that I blame them. I am ready for some warmer weather also.

On Saturday, the last of the 36 inch stumps of the old trees around our house were cut down to the ground level. The Stihl 064 power saw, with the 28 inch blade, that Steve had purchased from Leman Stuart, hadn’t been run for three years.

When he went to start it at 76 years old, he could no longer pull it through the compression cycle. He thought, ‘So this is what it’s like to no longer be able to start this big one.’ And then he put it back in the shop.

Larry Schlader stopped in to talk and when he heard about the problem with the saw he offered to start it for Steve. After three pulls it ran like a top.

Larry commented that he had cattle to feed and said, “I’ll let you get after it” and was on his way.

Once the saw was warmed up Steve had no problem starting it and those two 36 inch stumps were cut from the roots and hauled away by the John Deere tractor. The big roots that were holding up these tall trees are still to be dealt with, but that’s for another time.

A quote by Andrea Brocelli seems to fit this situation, “Destiny has a lot to do with it, but so do you. You have to persevere.”

And from Thomas A. Edison, “The most certain way to succeed is always to try just one more time.”

That is what happened when Steve explained the problem to Larry. The saw was started and the task was completed.

In the April 2021 issue of the Readers Digest, Bruce Kelley, Editor-in-chief had an interesting article in the Dear Reader column. His first job was as a cub reporter at the Gilroy Dispatch in California. The paper came out three times a week.

It covered the news for the garlic capital of the world. The Dispatch is still alive today! Editor Erik Chalhoub told Bruce that he’s undaunted, though the editorial staff is down to four people to put out the Dispatch and two other papers.

The Dispatch owns it’s own building, prints every Friday, and, with a couple of online stories a day, is on top of what people want to read.

“Gilroy still feels like a small town. The people care for their paper.”

Bruce Kelley went on to say, “Not that you need my encouragement, but I hope we all do that for our humble local papers.”

This article really touched a soft spot in my heart. Our local newspaper, the Clearwater Tribune, is one of the surviving newspapers and is valued by everyone who reads it. Thanks to Marcie Stanton and her crew who gather the news and present it once a week. We have a true treasure in our midst.