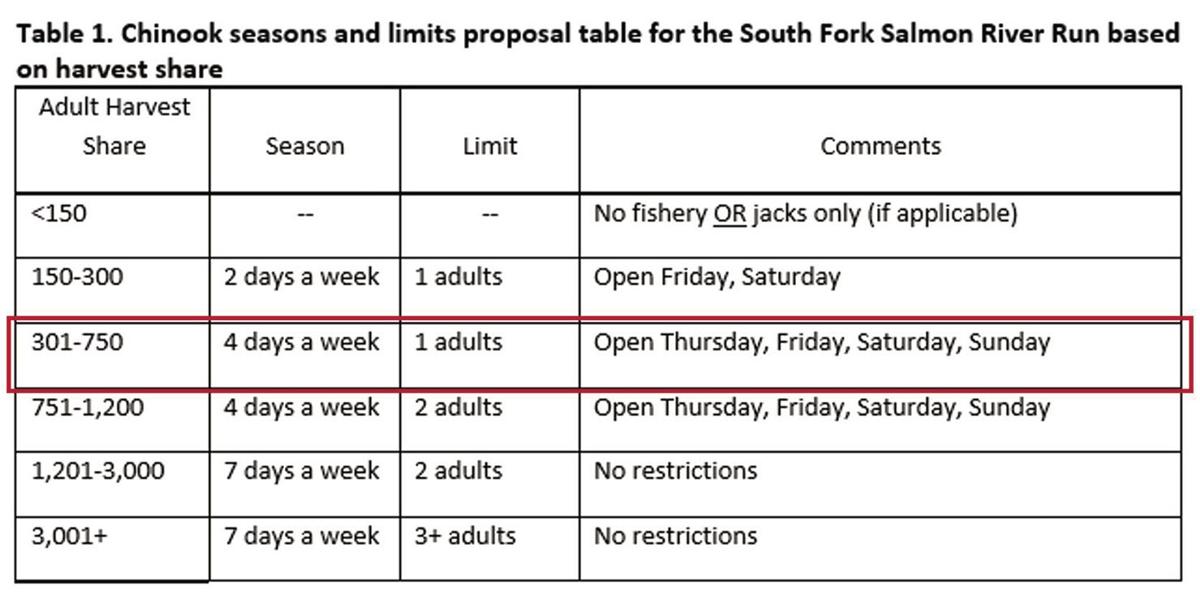 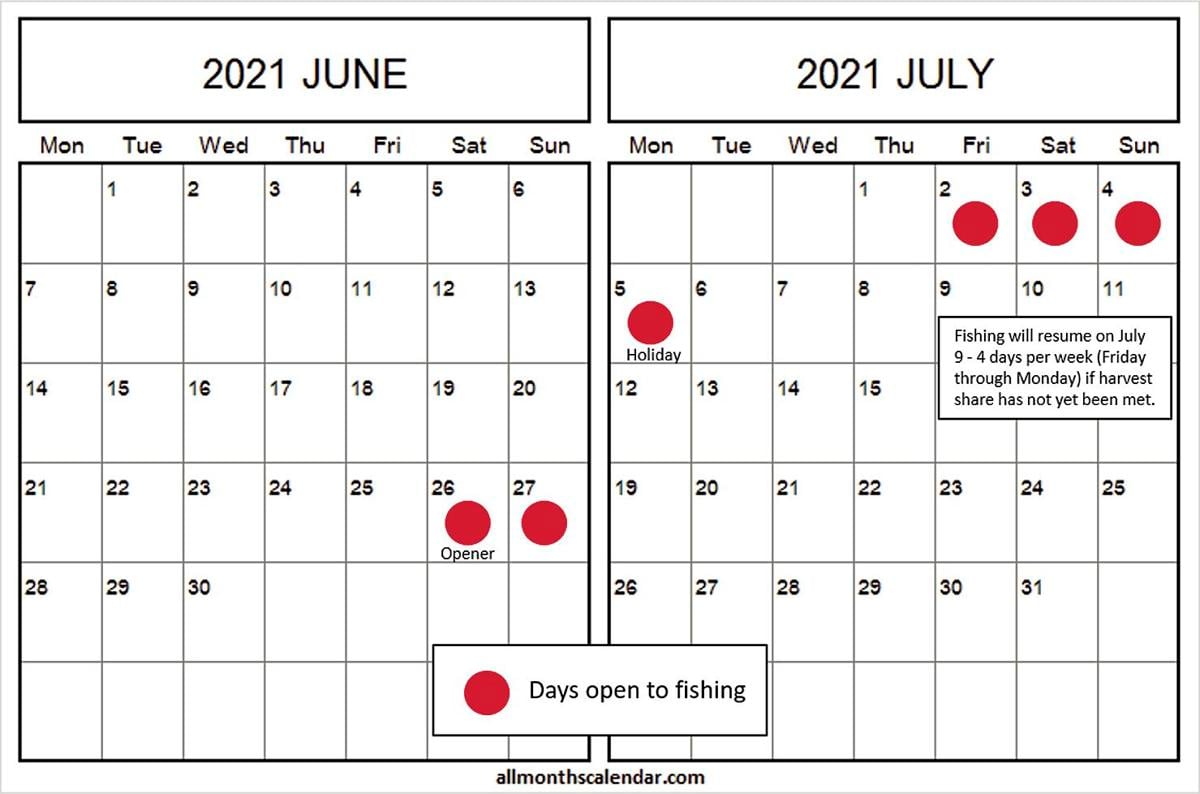 Before I get into the proposal, let me give you a little background. Prior to the last fishing interval (May 27-May 30) our harvest share estimate for the Rapid River Run was approximately 950 adults and we had harvested 427 adults up to that point - 522 adults remained in our harvest share. We announced on Tuesday, May 25, that the Lower Salmon would only be open for two more days and close at the end of fishing on Friday (May 28) - to ensure we were able to save close to 50% of the harvest share for Little Salmon anglers.

With only 950 adults available for harvest share, we obviously would have been done fishing for Rapid River Chinook for the season. However, early this week we received some really good news. An in-season real-time genetic assessment of Spring Run Chinook headed for Idaho told us that more fish were returning to Rapid River than the PIT tags were telling us. As a result, this week our harvest share estimate for Rapid River Chinook increased to 1,759 adults - leaving 825 adults still available for anglers to harvest out of the Rapid River stock.

The Little Salmon River remained open Thursday ,June 3, through Sunday, June 6, and fishing should be good. In addition, the proposal that the commission adopted will result in re-opening a portion of the Lower Salmon (Shorts Bar to Time Zone Bridge) to Chinook fishing for two more days as a result of the increased harvest share estimate. This means Lower Salmon anglers will get two more days of Chinook fishing in this year!

Fishing for Chinook Salmon re-opened on the Lower Salmon River (from Shorts Bar to Time Zone Bridge) on Saturday, June 5, and closed at the end of fishing hours on Sunday June 6. The daily bag limit was four Chinook Salmon per day, only one of which could be an adult.

The season on the Little Salmon River will remain open four days per week, Thursday through Sunday, until closed by order of the Director of Idaho Fish and Game.

Remember - as of June 1, the start of Chinook fishing hours is a half hour earlier (5:30 a.m., Mountain Time).

To date, we estimate that 2,200 adult hatchery Chinook destined for the South Fork Salmon River have passed over Bonneville Dam so far this year - and they’re still coming. Approximately 700 of them have already passed over Lower Granite Dam and are in Idaho! Travel time data suggests it takes on average around 20 days for Chinook to travel from Lower Granite Dam to the United States Forest Service Krassel area on the South Fork, and around 30 days to travel from Lower Granite Dam to the South Fork weir. Since the run is still materializing, we still don’t have an exact harvest share number nailed down. However, we are estimating harvest share will likely be somewhere between 300 and 800 adults.

Based on the results of angler surveys, we have developed the season-setting recommendation table below:

With an estimated harvest share between 300 and 800 adults, this season-setting recommendation table suggests angers would most prefer a four-day per week season, with a daily limit of one adult Salmon per day. We chose to go with the recommendation of one adult salmon per day, but fishing days will be a little different than what is listed in the table above. Let me explain why:

Many South Fork Salmon River anglers have told us that they are frequently disappointed when we open the South Fork Salmon fishery in mid-June, and the harvest share is reached just as the fishing gets good the first week of July. With that input, and the fact that harvest share will be relatively low this year, we chose to recommend a later opening date than normal, in the hopes that by the time the fishery opens there will be plenty of fish in the river to provide good fishing.

Additionally, we want to try provide fishing opportunity during the 4th of July holiday weekend - during the typical peak of the run. As a result, the fishing days for the South Fork Salmon River that were proposed and accepted by the IDFG Commission this morning are as follows:

Fishing will open for Chinook Salmon on the South Fork Salmon River, from the posted boundary 100 yards below the fish weir to the confluence with the East Fork South Fork Salmon River, on Saturday, June 26. Fishing will be open for two days on Saturday, June 26 and Sunday, June 27, but will then close Monday through Thursday that week, June 28 through July 1. The fishery will then re-open on Friday, July 2 and remain open Friday through Monday until closed by order of the Director of Idaho Fish and Game.

The hope is that we will at least get six days of good fishing in under this scenario, which will include the Fourth of July holiday period (see calendar). Daily bag limit will be four Chinook Salmon per day - only one of which may be an adult. Stay tuned for a South Fork Salmon River Chinook rules pamphlet in the coming weeks.

The last thing I want to mention for now is how we will be estimating harvest on the South Fork Salmon River this year. With a one adult daily limit it becomes very difficult for us to estimate harvest with traditional methods. Therefore, we’ll be operating check stations this year to get our harvest estimates. Many of you remember us doing this in previous years. Check stations will be situated at all access routes to the fishery, and allow us to interview every angler who leaves the fishery and collect fishing effort and catch information from them.

This will likely result in congestion and having to wait in line to be interviewed as you leave the fishery, especially at the end of a fishing interval, but will help us do the best we can to get an accurate estimate of harvest, so that we can determine when it is most appropriate to close the fishery so we don’t impact broodstock needs. Broodstock needs are approximately 1,000 adults for the South Fork. Please exercise patience while waiting to be interviewed at check stations, and understand that we are doing the best we can to manage this fishery the way you have asked us to manage it.

Since I started in this position in spring 2019 it seems that I’ve been giving Chinook Salmon anglers nothing but bad news. For once, it is nice to be able to give you some good news and offer some salmon fishing opportunity that hasn’t been available for what feels like a really long time. We have only had one South Fork season in the past four years).