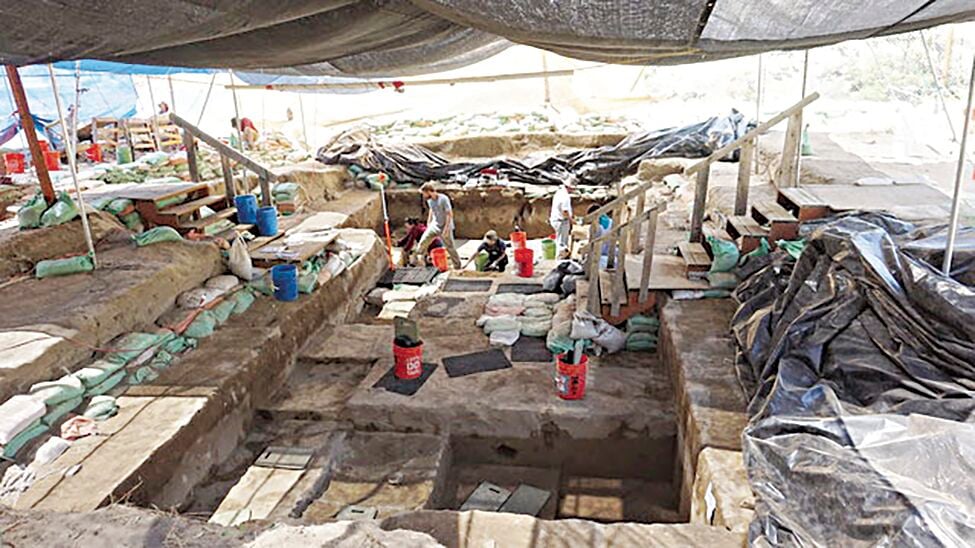 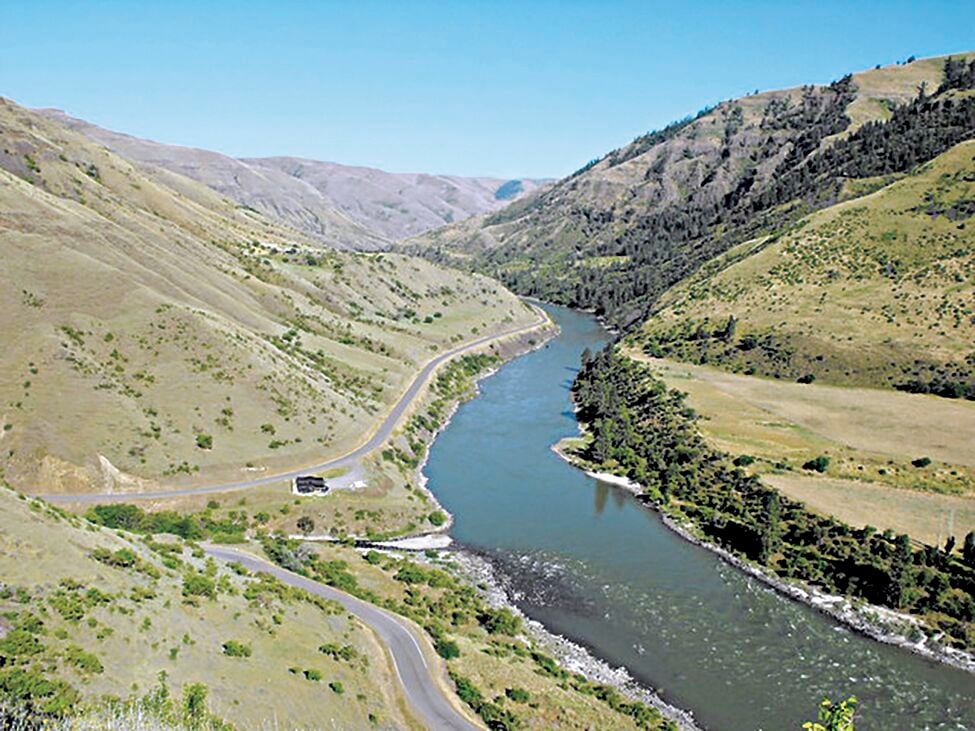 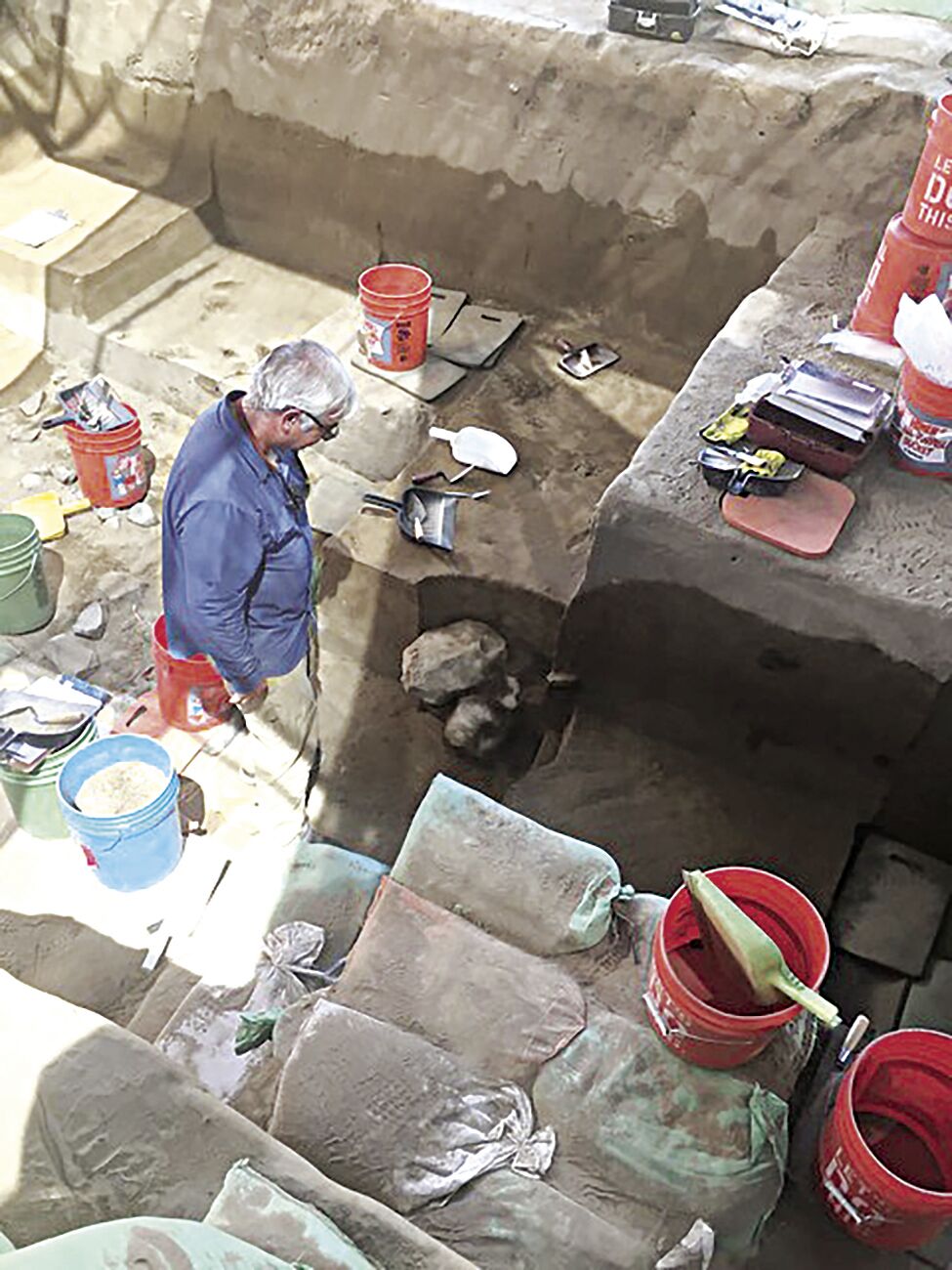 An artifact from the Cooper’s Ferry Excavation Site, a Western Stemmed Point that is dated to be approximately 13,000 years-old, can be viewed at the Historical Museum at St. Gertrude along with interpretive features.

For archaeologists, artifacts being unearthed at the excavation site at Cooper’s Ferry outside Cottonwood, are indicating much older human occupation in the region — more than a thousand years earlier than scientists previously thought – changing the timeline history on migrations across the Bering Strait thousands of years ago.

Stone tools and other artifacts unearthed suggest people lived in the area 16,000 years ago, among the earliest evidence of humans in North America.

Findings, published in 2019 in Science, add weight to the hypothesis that initial human migration to the Americas followed a Pacific coastal route rather than through the opening of an inland ice-free corridor, according to the study’s lead author, Loren Davis, a professor of anthropology at Oregon State University (OSU).

Located at the mouth of Graves Creek south of Cottonwood, the site served as a late 1800s ferry crossing up into the turn of the century. Excavations at the site concerning its prehistoric occupation build upon the research of B. Robert Butler, who first conducted archaeological study at this location in 1961, 1962, and 1964.

“The timing and position of the Cooper’s Ferry site,” he said, “is consistent with and most easily explained as the result of an early Pacific coastal migration.”

The Cooper’s Ferry site is known by the Nez Perce Tribe as an ancient village site named Nipéhe. Today the site is managed by the U.S. Bureau of Land Management (BLM).

Davis has been involved at the site since 1997, studying the site for the BLM when he was a grad student at the University of Alberta.

Butler’s idea about the earliest peoples of the Pacific Northwest were rooted in the shapes – surfboard-shaped — of certain artifacts, according to Davis in a 2013 interview, and in beginning his research he talked with area residents on what areas might be worth investigating: Cooper’s Ferry was one of those. Butler excavated, and in the artifacts he found were projectile points that are now termed the Western Stemmed Tradition, which are found all across western America.

“He definitely helped make contributions to that,” Davis said. “Cooper’s Ferry produced artifacts that are some of the oldest in the Northwest. That’s interesting to me, which is why we came back to take a second look in the ‘90s and later.”

After joining the OSU faculty, he partnered with the BLM to establish a summer archaeological field school there, bringing students from Oregon State and elsewhere for eight weeks each summer from 2009 to 2018 to help with the research.

The site includes two dig areas; the published findings are about artifacts found in area A. In the lower part of that area, researchers uncovered several hundred artifacts, including stone tools; charcoal; fire-cracked rock; and bone fragments likely from medium- to large-bodied animals, Davis said. They also found evidence of a fire hearth, a food processing station and other pits created as part of domestic activities at the site.

During the last two summers, the team of students and researchers reached the lower layers of the site, which, as expected, contained some of the oldest artifacts uncovered, Davis said. He worked with a team of researchers at Oxford University, who were able to successfully radiocarbon date a number of the animal bone fragments.

The results showed many artifacts from the lowest layers and are associated with dates in the range of 15,000 to 16,000 years old.

“Prior to getting these radiocarbon ages, the oldest things we’d found dated mostly in the 13,000-year range, and the earliest evidence of people in the Americas had been dated to just before 14,000 years old in a handful of other sites,” Davis said in the 2019 interview. “When I first saw that the lower archaeological layer contained radiocarbon ages older than 14,000 years, I was stunned but skeptical and needed to see those numbers repeated over and over just to be sure they’re right. So, we ran more radiocarbon dates, and the lower layer consistently dated between 14,000-16,000 years old.”

“The dates from the oldest artifacts challenge the long-held “Clovis First” theory of early migration to the Americas, which suggested that people crossed from Siberia into North America and traveled down through an opening in the ice sheet near the present-day Dakotas. The ice-free corridor is hypothesized to have opened as early as 14,800 years ago, well after the date of the oldest artifacts found at Cooper’s Ferry, Davis said.

“Now we have good evidence that people were in Idaho before that corridor opened,” he said. “This evidence leads us to conclude that early peoples moved south of continental ice sheets along the Pacific coast.”

Co-authors of the paper include David Sisson, an archaeologist with the BLM; David Madsen of the University of Texas at Austin; Lorena Becerra Valdivia and Thomas Higham of the Oxford University radiocarbon accelerator unit; and other researchers in the U.S., Japan and Canada. The research was funded in part by the Keystone Archaeological Research Fund and the Bernice Peltier Huber Charitable Trust.

The Historical Museum at St. Gertrude is open Monday through Saturday, 9 a.m to 4:30 p.m. and is located at 465 Keuterville Road, Cottonwood, Idaho. For more information, call 208-962-2054 or visit historicalmuseumatstgertrude.org.

Information for this article came from a 2019 story by Michelle Klampe, OSU Office of News and Research; and a 2013 Ruralite magazine article by David Rauzi.

David Rauzi has been telling Idaho County stories for nearly 25 years. The Grangeville resident is the editor of the Idaho County Free Press, and provides monthly feature personalities in Ruralite magazine.*