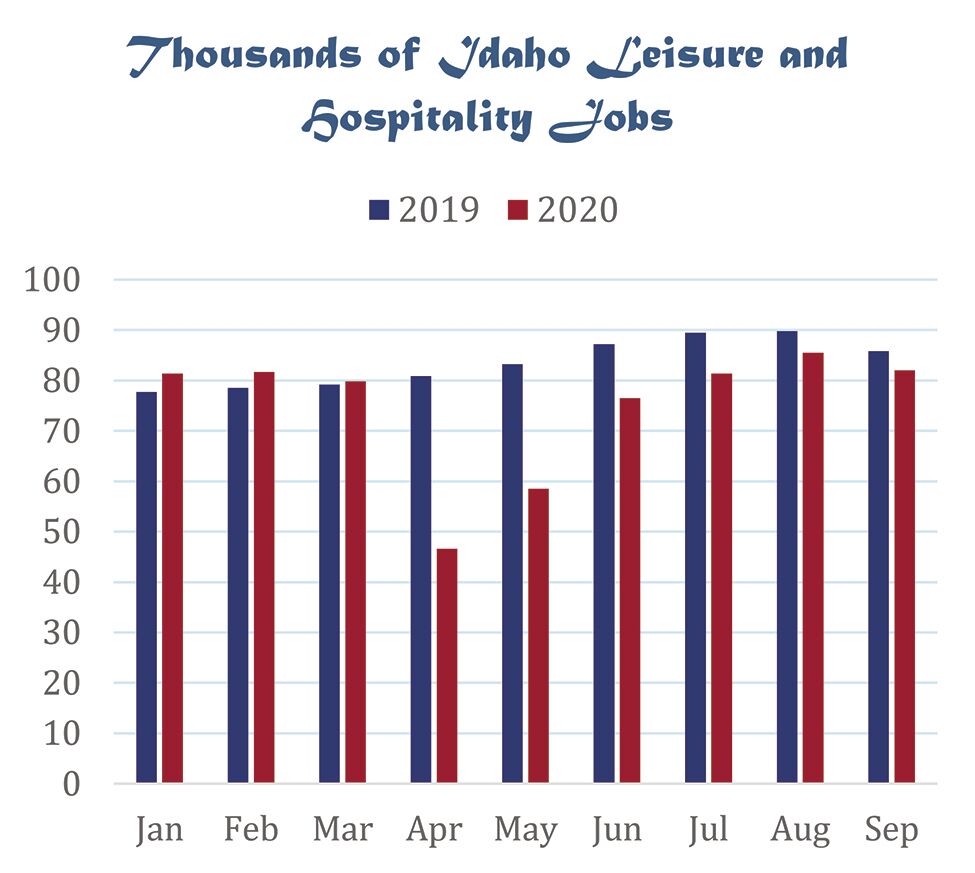 Nationwide, and here in North Central Idaho, no other industrial sector has experienced more devastation from coronavirus than the leisure and hospitality sector—which includes restaurants, bars, lodging, and amusement and recreation. In the 31 weeks that began March 15 and ended Oct. 17, 30,584 Idaho workers from the leisure and hospitality sector filed new unemployment claims. That was nearly 20 times higher than the 1,551 who filed in the same 31-week period in 2019.

In just one month—between March and April, Idaho’s leisure and hospitality jobs plummeted 42 percent from 79,800 percent to 46,600. In the following months, most jobs returned. As of September, jobs were 4.1 percent below their level the year before. The net effect of the pandemic, so far, is the loss of 3,800 jobs between September 2019 and September 2020.

Some of Idaho’s resilience came from its long-term economic and population growth. Economic growth leads to increases in business travel, while a fast-growing population buoys restaurant and recreation job. While U.S. nonfarm payroll jobs grew 8.3 percent between December 2014 and December 2019, Idaho grew nearly twice as fast—16.5 percent. Only Utah grew faster than Idaho—17.4 percent rate. Between 2014 and 2019, Idaho’s population rose faster than any other state’s—increasing 9.6 percent, nearly three times faster than the nation’s 3.1 percent.

What happened to unemployment after mid-October?

Labor force statistics, including unemployment rates, are always for the week containing the 12th of the month. Weekly unemployment claims suggest that unemployment probably did not decrease significantly between October and November.

Continued claims also showed a large increase--nearly doubling from 480 in the four weeks in late October and early November 2019 to 951 this year. “Continued claims” refers to claims made by unemployment workers who have already filed an initial claim and continue to receive weekly benefits.

We don’t yet have evidence about what happened after increased COVID restrictions were imposed in mid-November.