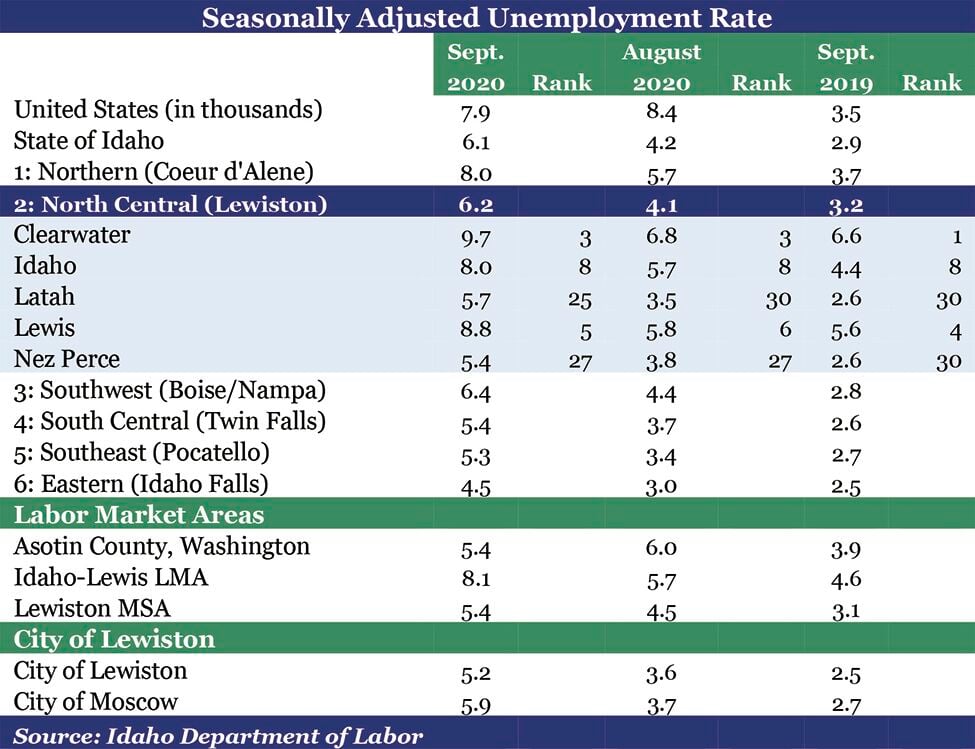 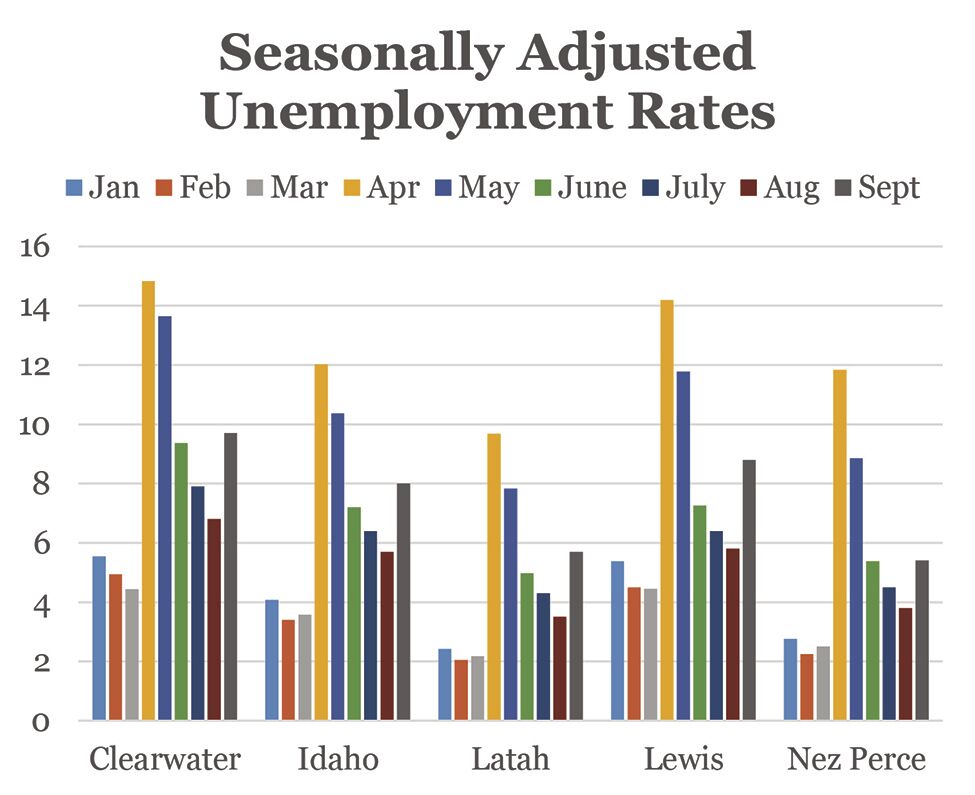 Coronavirus continues to throw surprises at North Central Idaho. Its seasonally adjusted unemployment jumped from 4.1 percent in August to 6.2 percent in September, according to statistics released today by the Idaho Department of Labor. All of the region’s counties had sharp increases in unemployment. Their rates remain far below their coronavirus-era peaks in April but roughly double their pre-coroanvirus lows in February, which were record lows.

The total number of unemployed residents in North Central Idaho grew from about 2,200 in August to about 3,300 a month later. In February, before the pandemic, about 1,400 residents were jobless.

About 900 of the newly unemployed in Clearwater, Idaho, Lewis, and Nez Perce counties were people rejoining the labor force, because they perceived better opportunities to find work. When people join the labor force by starting to look for work, they are counted as unemployed until they find employment. Discouraged workers—people who gave up looking for work after they lost their jobs in March or April—were counted as “out of the labor force” and not included in the counted of “unemployed”—a definition which requires that people be actively searching for work. A temporary increase in unemployment as formerly discouraged workers re-enter the labor force is normal in many recoveries.

The unprecedented economic shock caused by the onset of the pandemic and the tremendous uncertainty about the course of Covid-19 itself and of the recovery from the recession are likely to continue to bring surprises—both good and bad.

A bright note in data released today was job growth at employers in the Lewiston metro area. According to U.S. Bureau of Labor statistics, total nonfarm payroll jobs in the Lewiston metro area (Nez Perce and Asotin counties) grew 1.5 percent between August and September. That was the fastest growth among Idaho’s five metro areas. Nonfarm payroll jobs this September were about two percent lower than in September 2019.

As of Oct. 10, 11 percent of the region’s workers had filed initial unemployment claims since the pandemic begin.

Total nonfarm jobs dropped by 1,000 (-0.1 percent) to 758,600 for September. A substantial gain of 1,800 jobs in leisure and hospitality (+2.3 percent), combined with modest increases in financial activities, natural resources, and trade, transportation and utilities, were not enough to compensate for job declines in other industries, including a loss of 2,200 jobs in government (-1.7 percent).

Idaho Falls continued to be the only MSA to show year-over-year nonfarm job gains at 3.7 percent. The remaining four MSAs saw job losses with Coeur d’Alene showing the largest decrease at 4.9 percent.